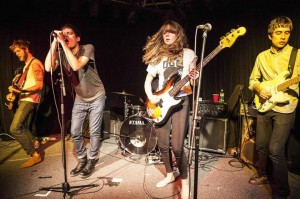 Ex-Cult is headlining the Empty Bottle for the first time after opening for Ty Segall and Mac DeMarco respectively at the Bottle last year. Their first full-length album, “Ex-Cult,” was recorded and produced by Segall in San Francisco in 2012. After extensive touring, they recorded “Midnight Passenger,” their second full-length album, which was released on April 29 on Goner Records. The effort is a powerful step forward in their raw mix of Memphis punk rock and gritty psychedelia.

“Midnight Passenger” is one of the best punk albums I’ve heard in the past few years, completely void of the fuzzed-out jangle that has been exhausted in punk and garage music as of late. It’s heavy and intelligent and has some serious cojones. Check out this show to witness Ex-Cult’s trip on the up and up. (Reilly Gill)