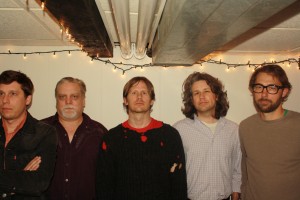 The album opens with its own thing, like if Britpop could boogie. Coming from Josh Chicoine, current artistic director and co-founder of CIMMfest, the music is a natural extension of all his previous work. Sabers play pop-rock with an adventurous edge. Sure, it’s pretty and pop-tinged, but so were The M’s, Chicoine’s previous outlet, a group with harmonies so sweet that they won over a whole new audience via an appearance on the big-budget video game MLB2K7, right alongside The Stooges, Nirvana and 311. But “Sic Semper Sabers” is its own thing. The track “Money Eddie” cloaks its charming verses in a sinister swirl of synth and bombastic beats, somewhere between The Beta Band and The Flaming Lips. On “Remedy,” all the flourishes of orchestral instrumentation shine bright courtesy of Max Crawford’s wonderful horn section lifting a wilting refrain to a summer simmer. “Ever Eyeing” has a beautiful build-up where Chicoine’s falsetto meets a handclap crescendo; while “Puppet” has the type of mocking melody that a taunting toddler would issue. Take your pick, Sabers’ debut is full of playful, impactful, well… hits! Okay, maybe not if measured by units sold, but in some alternate version of America (maybe even the one in your own backyard) Josh Chicoine is making compelling music to widespread acclaim.

When the “poptimism” of nineties culture was overcome by the anxiety of the aughts, Chicoine’s choice to pursue something new became labor intensive. “Through the course of failing at making M’s songs, I made this other thing, and that’s usually the way it goes for me. I’ll put all my energy and effort and focus in on one song that I will never finish, but then in the midst of all of that will be like four songs that’ll branch off of that, cause I’ll get so frustrated. The songwriting process is a frustrating process. And there’s a lot of misses, not too many hits.” A certain expression was working its way out through endless demoing in a key practice space: an old Salvation Army church in Andersonville, split with Urge Overkill. It was a big change of pace from Chicoine’s previous band which, admittedly, “was just about being in a fun band with your friends: just sit around and drink thirty-packs all day long, and come up with crazy stuff that you really dug. That’s what The M’s was.” Now a father in the midst of a career change, Chicoine’s newfound patience was paying off artistic dividends.

Sabers’ debut may be the best this year out of Chicago, and it has everything to do with a refined melodic ambition, something most independent acts eschew for fear of lost integrity. A band’s appeal can’t be both money-making mainstream and genuine DIY-indie, so the logic goes. “Sic Semper Sabers” flies in the face of willful obscurantism in favor of big hooks and infectious melodies. It’s nostalgic without being a retread; pop without being plastic. It’s ambitious because it’s appealing, and that’s alienating. “It takes a certain amount of bravery to do anything,” says Chicoine. “I’m just a filter. All of these ideas, these family trees of sounds and melodies and all of that stuff—total drawing upon the past. I’m not gonna pretend that this is some groundbreaking, earth-shattering art project. But yet, there is that part of me too. So I hope, and what I try to do through psychedelia, and through harmonies, and the way that I interpret it, is try to make something that’s easily understood right away, but better understood if you stop what you’re doing and listen.” To that end, Chicoine’s wavering, airy vocal in “Vultures” veers from Thom Yorke to Jeff Buckley, the song shifting from Radiohead to Gorillaz halfway in via big digitized bass, resolved somehow in the sound of Spoon covering “Sound and Vision” by David Bowie. If you’re passionate about music, listening to Sabers’ debut is brilliant fun precisely because of these phantom reference points. It’s not a ripoff, nor a tribute. “Sic Semper Sabers” is the sound of the twentieth century exhaling, and it ends abruptly, with a propulsive riff. 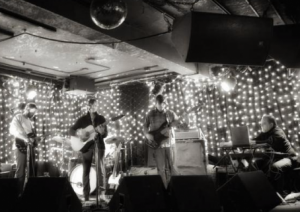 The record has been a long time coming, and the songs bear the weight of the effort. Not so much overworked, as time-tested. In a different capacity, Chicoine is most certainly career-oriented, but with Sabers, a freedom takes form. He paraphrases filmmaker Alejandro Jodorowsky on the essence of artistic sentiment: “The whole thing of art is to show each other our hearts, and to see that there’s commonality in something. And listening to music, not to be too highfalutin about it all, but that’s searching for that connection.” The mentality carries over into performances as well, with Sabers gearing up for a live score to a film sometime in the fall. Chicoine is hungry to create events, happenings, weird experimental moments to share with other Chicagoans. He’s about creating occasions to celebrate community. “Anything that can pull in more people,” he says, “and make it like, ‘this is ours’ versus ‘this is mine.’” A sentiment that everyone can share.