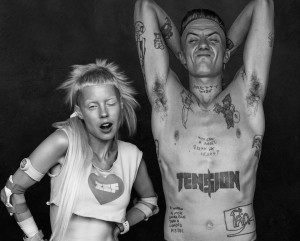 Known for a steady output of eyebrow-raising viral music videos, Die Antwoord has been rather quiet in the last year. This seems odd with the release of their third album “Donker Mag” fast approaching (same day as this show, y’all). In 2008, the group formed out of South African rapper Ninja, his freakish sidekick chick Yo-Landi Vi$$er and well-respected hip-hop producer DJ Hi-Tek. As artists, their images precede them. Whether performing in skivvies with Sharpie-drawn dollar signs across their genitals, blacked-out contacts, or a full-body Pikachu costume, their shtick arises as an exaggerated depiction of their egos. Die Antwoord’s raps tread shamelessly from sexually explicit and violent topics to challenging South Africa’s class systems and gender roles. Their provocative music videos have pushed their fandom to global proportions. “You have to listen to them a few times to get it,” says fan Alisha Jones. Anticipating an exceptionally wild gig, Jones is stoked that their Chicago show falls on the same day as the new album’s release. “Their shows are really dark, really foreign and really good. Expect a lot of teens, German women and people dressed in costumes who may touch you.” For the second time, she’s going dressed in a head-to-toe Gloomy Bear costume, the same one Yolandi wears in the Harmony Korine film “Umshini Wam.” Jones admits their shows are the closest thing she’ll probably get to a goth hip-hop rave, and remarks, “I can’t wait to dance.” (Jessica Burg)