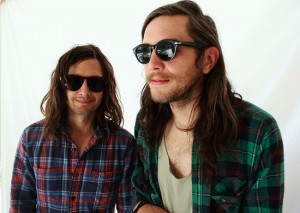 If you’re looking to blow off some steam on a Friday night, catch Tweak Bird, Fake Limbs, and Nones at the Beat Kitchen. This mixed bag of psych, hardcore and art rock should do the trick.

Tweak Bird is an LA-based pair of brothers who just released their first full-length LP on Bloomington, Indiana’s Let’s Pretend Records. Their psych vocals can get so high they’re almost delicate, but are balanced out with waves of thick, rolling guitar riffs and heavy drums. The go-to psych influences are obvious, but there are also whispers of the Melvins and The Jesus and Mary Chain to keep things unpredictable.

Chicago favorites Fake Limbs are wrapping up a short Midwest/East Coast tour with this show. Their exhaustively enthusiastic live sets channel the nineties hardcore that got sloppy very easily, but they get the arrangements so tight that they sound like what those bands probably thought they sounded like.

Nones are fresh out of HoZac Blackout Fest, making a bigger name for their sound, one that is theatrical in the coolest, non-show-tunes way possible. Think “Reptilia” by The Strokes, but make it much louder and much weirder. Nones are a fresh breed of punk music that may not make a lot of sense at first listen through your headphones, but will make perfect sense live.

So sure, it’s been a long week, the air conditioner in your office probably doesn’t work very well, and you’ve had enough. What better way to give the workweek the finger than really getting into some heavy psych and hardcore? (Reilly Gill)