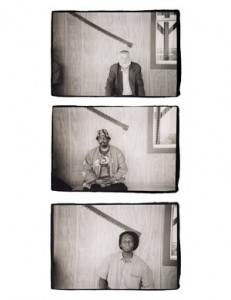 This trio’s 2003 effort “Never Too Late But Always Too Early” has to be considered one of the finest jazz recordings released since the turn of the century, but bandleader Brötzmann is not contented by success. Even that record, clocking in at nearly two hours of finely tuned free-swinging dynamism, couldn’t convince the German maestro to contain the combustible energy that marks the collaboration. Together, Brötzmann, Drake and Parker sound less like collaborating artists, and more like brothers from the same womb—their synergy is that awesome. Just about any sound can be layered above the rhythmic pulse of Drake and Parker to great effect, but with Brötzmann blowing, the audience is promised something special from the onset.

Though the trio hasn’t performed since 2004, there were still high expectations to meet when they strolled onto Constellation’s stage. The standing-room-only affair, packed with folding chairs and a line out the door, was perfectly booked at Mike Reed’s venue. The all-black interior of the room, completely devoid of advertisements of any kind, allowed the audience to attune completely to the musicians, an attention level that the trio commanded with expert ease. Missing were the romps of rhythm that made the impact of previous outings so immediate, replaced instead with nuanced texture, something of a roundabout for a group that’s capable of anything. Brötzmann on clarinet would make Artie Shaw blush, while Drake and Parker syncopated drums and bass almost unintentionally, as if they were opposing magnets. The sound was so intensely alive that the standard set break seemed passé. With long breaks for applause between tunes, Drake marked the occasion with a hand-drum and a lovely singing voice, (the lyrics in Arabic, perhaps offering the names of God?) and was joined by Parker on guimbri and a forced flutter from Brötzmann’s woodwind. The beauty of the moment overwhelmed the crowd’s anxiousness for a trip to the bar, and by the end of the performance, the shortest song of the night offered a powerful exclamation point exemplifying the trio’s potency. At age seventy-three, Brötzmann’s playing remains the brightest around, pushing Drake and Parker to dig deep while his saxophone soared, stopping on a dime when the sound had momentarily settled. Let’s just hope it isn’t settled for good. (Kenneth Preski)