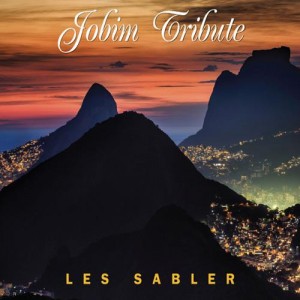 Among Brazilian composers recognized internationally, you could certainly say that Antônio Carlos Jobim compares to none other so far—he is one of the few whose body of work is just as respected as that of Gershwin or Harold Arlen. However, few contemporary fans know his work beyond “The Girl From Ipanema,” “Corcovado (Quiet Nights of Quiet Stars),” “Desafinado” or maybe “Waters of March” simply because his other songs have been absent from jazz songbooks of late.

On his “Jobim Tribute” album,  guitarist Les Sabler seeks to remedy this. Through twelve tracks he goes deeper into the catalog, bringing out lesser-known tunes such as “Bonita” (a tune recorded for Jobim’s second collaboration with Frank Sinatra), “Ligia” and “Esquecendo Você,” all poignant songs penned later in his career. Sure, “Quiet Nights,” “No More Blues” and “Fotografia” (best known Stateside as “Zingaro”) are also present, but your attention is drawn to the other ones thanks to the almost devotional treatment that Sabler gave them with the backing of a stellar band.

On some of the tunes the arrangements seem almost like a homage to Claus Ogerman, the arranger renowned for working with Jobim on various albums (including his first release with Sinatra), with subtle keyboards giving the tracks a nice texture. Sabler sought his own sound here, but he also respected the original feel of the songs. For instance, “Chega de Saudade” has the same intro present on Jobim’s recording, but then it goes into jazz territory with his carefully played improvisations. (Ernest Barteldes)