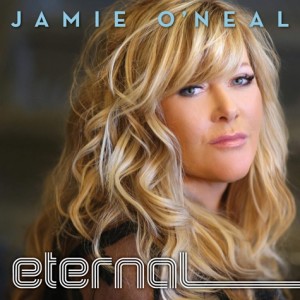 Australian-born country singer Jamie O’Neal has had a pretty difficult relationship with Nashville labels since she arrived on the scene in 2000. Over the years, she has signed and parted ways with several of them, including Mercury and Capitol, until she decided to follow the independent route and start her own label, Momentum Label Group.

“Eternal” is a strong album, which brings together original songs alongside a handful of covers. Among those is a straightforward version of Kris Kristofferson’s “Help Me Make it Through the Night,” a tune that was a hit for fellow Aussie Olivia Newton-John on her debut album and that was also covered by several other artists, including Elvis Presley and Gladys Knight. There is a playful take on Loretta Lynn’s “Don’t Come Home a Drinkin’ (With Lovin’ on Your Mind).” The up-tempo “Rock Me” is sure to move audiences in a live format, and her duet with Andy Griggs on “Golden Ring”—a ballad about the importance of a relationship in lieu of jewelry—is quite moving.

There are a couple of duds—the spiritual ballad “The Sweetest Thing” sounds a bit overproduced, and the down-tempo breakup ballad “I’ve Done Enough Dyin’ Today” is more filler than anything else. But I must say I was positively amused by “Wide Awake,” a humorous tune about a sleepless woman who snores “like a NASCAR race running on his face.” (Ernest Barteldes)