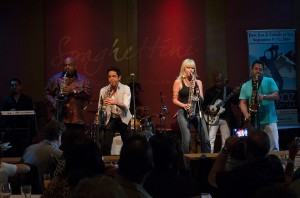 Accompanying Dave Koz will be saxophonist Mindi Abair, who recently showcased her versatility on her solo release “Wild Heart.” Though she is considered a jazz musician, she also has a strong pop background, having worked with the likes of Josh Groban, Duran Duran and Aerosmith. She mixes things up nicely, opening with the New Orleans-themed “Amazing Game,” in which she duets with featured guest Trombone Shorty, and then rocks out on the title track on vocals. “Haute Sauce” is a boogie-themed jazz tune with a strong backbeat, and “Kick Ass” is a bona fide hard rock song with a killer guitar solo from Aerosmith’s Joe Perry. “Addicted to You” pays homage to Booker T & the MGs with Booker T. Jones himself on the B3.

Abair also shares a heartfelt vocal duet with Gregg Allman (of the Allman Brothers Band) on the folk-flavored “Just Say When,” a song whose lyrics speak of a long-time love affair whose flame has not gone even after a long time. Also notable are “I’ll Be Your Home,” an uptempo blues song featuring Keb’ Mo’ on vocals and guitar, and “The Shakedown,” an uptempo shuffle in which Abair shares the spotlight with drummer Max Weinberg and guitarist Waddy Wachtel. “Wild Heart” is a really fun album perfect for warm summer nights even after repeated hearings.

She will be performing in Chicago with Dave Koz & Friends Summer Horns: Friends being Abair, Gerald Albright and Richard Elliot—the same quartet she recorded a Grammy-nominated album with in 2013. (Ernest Barteldes)