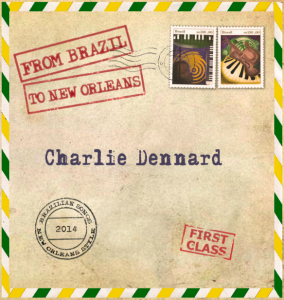 “The music, history, food and culture of Brazil and New Orleans have so much in common that it just seems logical to put them together,” writes keyboardist Charlie Dennard on the liner notes for the independently released “From Brazil to New Orleans.” The same has been said by various Crescent City musicians I have interviewed over the years, because the liveliness and musicality of cities like Rio de Janeiro and Salvador makes them feel right at home.

The disc opens with the original “Itape,” a contemporary jazz piece clearly inspired by the work of Egberto Gismonti. The festive “Capoeira Mata Um” cleverly mixes zydeco with maracatu (pronounced ma-ra-cah-TU), a rhythm indigenous to northeastern Brazil that has recently been discovered by American jazz musicians. The main melody is carried by trombonist Rick Trolsen, who is then joined by the ensemble. The best track is definitely their take on the classic Luiz Gonzaga song “Asa Branca,” a tune that speaks of the suffering of the northeastern farmers when faced with the all-too-common extended droughts in the region. The simplicity of the melody and its slow tempo allow for much improvisation from the group, and translates the song’s original mournful feel. Also check out the funky “Africa Mae,” here played in 6/8 time, which also allows for much musical creativity. (Ernest Barteldes)