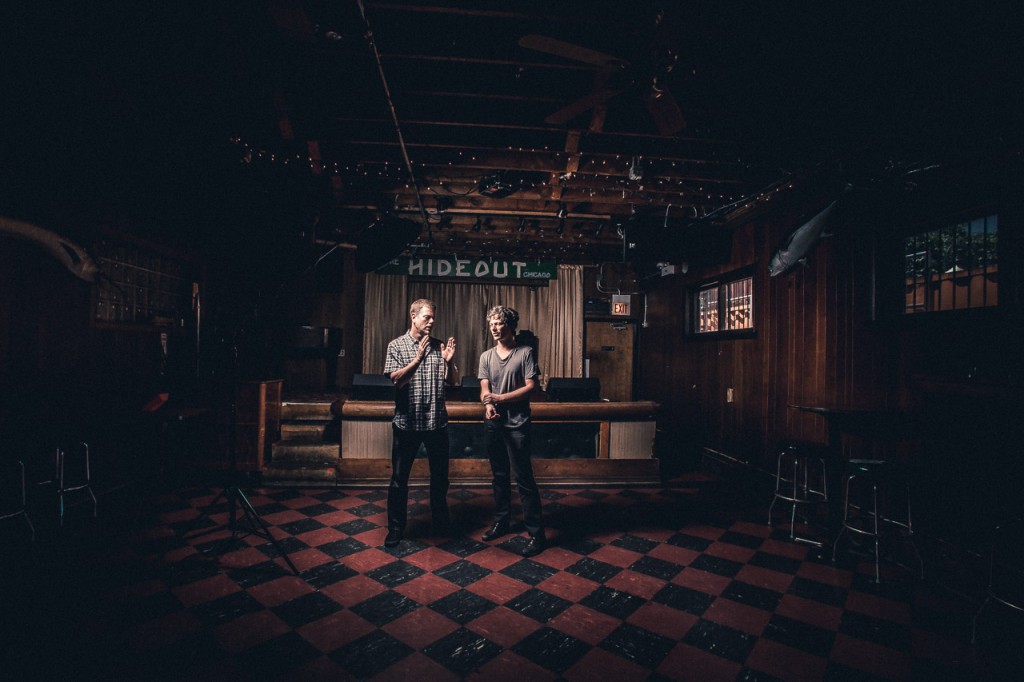 Chicago, you are a big, bold, beautiful city of infinite complexity. Your historical heritage, your social and political upheaval, your segregation, violence and corruption have birthed an incredible wealth of musical expression. It’s by virtue of these artists that our community confronts and escapes the mistakes of our metropolis. And so our publication listens intently, offering a nuanced dialogue with the musicians who craft our culture. Yet, once a year, we redirect our approach to the opposing swing of the pendulum. We zoom-out where we would normally zoom-in. This list offers a broad-stroke survey of those Chicago musicians whose current cultural currency is readily represented to the city and to the rest of the world, living artists whose quantifiable influence echoes their effect. Some big names are missing, some rankings seem arbitrary, but it’s toward these acts, firmly Chicagoan, that we look when we seek out the spirit of home. Where our words might fail, the music will not. (Kenneth Preski)

All photos taken on location at The Hideout by Joe Mazza of BraveLux.

1
R. Kelly
By the numbers, R. Kelly is absolutely massive, bigger than a vast majority of Chicago artists by orders of magnitude. Estimates of how many albums he’s sold vary from thirty million to over a hundred million. He’s been nominated for a Grammy on twenty-four occasions. His latest album, “Black Panties,” debuted at number four on the Billboard 200, and went on to sell more than three-hundred thousand copies in the United States alone—this at a time when record sales are at an all-time low. The album’s most popular single “Cookie” has over six million YouTube views. The man can sing two phrases about a “Sex Dolphin” for Rolling Stone and get tens of thousands of Facebook likes. Despite intensified scrutiny over his legal troubles, and the ethical issues associated with supporting his work, R. Kelly remains the indefatigable scion for a style of music that has always been Chicago’s biggest export: R&B. Few if any Chicago-born artists have ever reached the huge audience that R. Kelly has, making him an easy (if not queasy) number-one pick for a survey of active, influential musicians from our city.

2
Riccardo Muti
Whether he is throwing out the first pitch at a Cubs game, performing “Chelsea Dagger” in a Blackhawks jersey, giving a commencement address alongside Stevie Wonder, bantering with the rock group Chicago, discussing culture with Pope Francis, or joking with a national convention of music critics, Riccardo Muti has become Chicago’s most charming and eloquent cultural ambassador. Of course, the rich and the famous flock to him, indeed, the Chicago Symphony Orchestra received two gifts totaling $32 million dollars last month, the largest in its history. And yet, no less important to Muti has been to open up the doors of the CSO to all, bringing in busloads of seniors to hear his open rehearsals, working with young musicians and community orchestras on his days off, visiting prisoners and bringing them music and hope. Even the downtown homeless know Muti and Muti knows them. And in case too much is made of the Muti side of the extraordinary Muti/CSO equation, it is Muti himself who constantly reminds the city what a “jewel” it has in its hometown orchestra, the envy of orchestras everywhere. That Muti has decided to renew his five-year CSO contract which expires after the upcoming 2014-15 season—which begins September 18 and is followed with a free concert in Millennium Park September 19—that will extend his music directorship through 2020 means that as revelatory as these past few Muti seasons have been, the best is yet to come.


3
Buddy Guy
After moving to Chicago in 1957, Buddy Guy stopped at nothing to prove his loud, chord-scrambling guitar styles deserved a place in Chicago’s blues scene. Still touring, Buddy is celebrated as a blues titan and living legend. After gaining recognition as house guitarist at Chess, Buddy went on to record more than sixty albums, working with Junior Wells, Eric Clapton and many more. His most prestigious awards include Grammys, the National Medal of Arts, Kennedy Center Honors, a place in the Rock and Roll Hall of Fame, and Billboard’s Century Award along with the title Greatest Living Blues Guitarist.

4
Mavis Staples
Over the last near sixty years, with the Staple Singers and as a solo artist, Mavis Staples has been one of the best–and most important–voices in American music. Beginning as a gospel group in the mid-fifties, the Staples would eventually become a key part of the soundtrack to the civil rights movement. Through the late sixties into the early aughts, Staples released a series of solo records, including 1989’s “Time Waits for No One,” which featured six songs penned by Prince. Her most recent collaboration with Wilco’s Jeff Tweedy, who produced, co-wrote and provided musical backing on the Grammy-winning “You Are Not Alone” (2010) and the even-better “One True Vine” (2013), is proving to be perhaps one of the best musical partnerships in recent memory, and has introduced her brand of stirring, soulful blues to a new generation of listeners who might otherwise only know her for her family band’s signature single, “I’ll Take You There.”

5
Common
Now long beyond the homegrown Chicago poetics that took him into hip-hop’s limelight, Lonnie Rashid Lynn Jr. is a national figure as an actor and public personality. But the forty-two-year-old first mattered to his birth city as “Common Sense,” a folk raconteur of sad streets with an impeccable feel for verse on his nineties classic local albums “Can I Borrow a Dollar?” “Resurrection” and “One Day It’ll All Make Sense.” And his timeless opus came in 2005’s “Be,” when Lynn paired with producer Kanye West to craft an amalgam of soul, spoken word and soul-pounding rap soliloquies that captivated the mainstream and made Common a star bigger than Chicago. Lately, his willingness to embrace the new generation of Chicago rappers, many with lyrics at odds with his own value system, has shown a new maturity for his role in the city, and may just be the internal solution that cultural critics have been clamoring for in response to the “Chiraq” movement.

6
Jeff Tweedy
Wilco fans have been left craving a new release from the critically acclaimed Americana band for several years now, so when lead man Jeff Tweedy announced in May that he would be releasing a solo album this year, it turned plenty of heads. Tweedy clarified a month later that it would not be a solo project, but rather a dual effort with his son, Spencer. The familial news was only fitting for Tweedy, given that Wilco has grown nearly synonymous with the “dad rock” label. On top of headlining duties at The Taste of Chicago, the pair is slated to release their first album “Sukierae” on September 16.

7
Smashing Pumpkins
When the Smashing Pumpkins reunited—or rather, when genius/professional oddball Billy Corgan recreated the seminal alternative act with new members—to release “Zeitgeist” seven years ago, it seemed for many of us who loved their wonderfully noisy, gothy releases of the nineties that the group was not going to be able to successfully transition to the twenty-first century. Then, in 2012, the group released the excellent “Oceania,” a strong reminder of how brilliant a songwriter Corgan is when he aims high. Like the best Pumpkins work, it was an expansive, grandiose idea album that would be beyond pretentious if not handled just right. The group is currently at work on “Monuments To An Elegy,” slated for release in 2015, which Corgan has described as “more so on the epic side of things.” No word yet on how much new drummer Tommy Lee has contributed to said epicness.

8
Chaka Khan
An indication of Chaka Khan’s significance to her native Chicago is that last year, a section of Blackstone Avenue by her old high school Kenwood Academy was renamed “Chaka Khan Way” and the City of Chicago celebrated “Chaka Khan Day” with Khan herself performing at Millennium Park. The ten-time Grammy Award-winning Queen of Funk, now sixty-one, has sold some seventy-million albums across a storied four-decade plus career both as the front-woman for Rufus and as a solo artist. It was Stevie Wonder who gave Khan and Rufus their first hit, “Tell Me Something Good” forty years ago, and Wonder who appeared with Khan and her family when she received her Hollywood Walk of Fame star in 2011. Khan is known for her genre-bending, ground-breaking vocalizations that have encompassed a unique blend of R&B, pop, rock, gospel, country, classical and world music, but as a songwriter, she is also known for her chart-topping hits for Prince, Steve Winwood and Robert Palmer. All of these talents will be on display when Khan appears August 9 at the Chicago Theatre.

9
Jennifer Hudson
Few careers have had the peaks and valleys that Chicago native Jennifer Hudson’s has had. After becoming a top-ten finalist on “American Idol,” the public perception was largely that she had been overlooked when she heartbreakingly placed only seventh place. Less than two years later, Hudson made her screen debut as Effie White in “Dreamgirls” in a tour de force performance that earned her an Academy Award for Best Supporting Actress. While still basking in that Cinderella-like success, Hudson’s mother, brother and nephew were murdered, which took her out of the spotlight for a time. Meanwhile, her debut album “Jennifer Hudson” became a Grammy Award-winner and spawned a double-platinum hit single. In 2011, Hudson became a best-selling author detailing an eighty-plus-pound weight loss, and last year she received a star on the Hollywood Walk of Fame. Hudson is preparing to release her third album in August, a reminder that despite her many successes, it is her virtuosic and heartfelt singing rooted in her South Side church choir experience that remains the centerpiece of her plethora of talents.