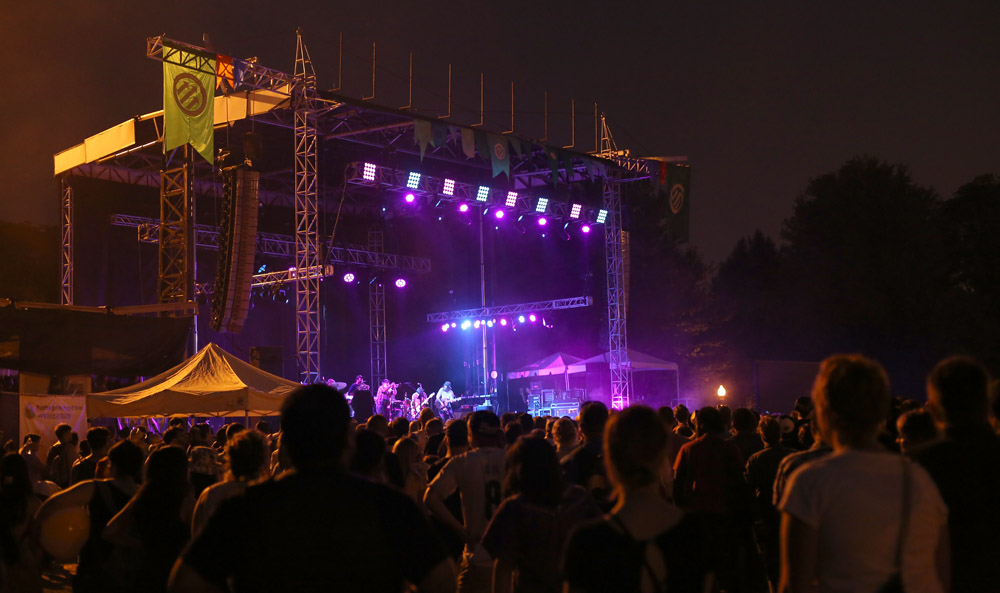 Before Neutral Milk Hotel took the stage for the final concert of Saturday night at Pitchfork, an announcement came over the speakers: at the request of the artist, no taking of photographs and video would be allowed. And the video screens that normally show the performers on Pitchfork’s stages went dark. Jeff Mangum, the famously reclusive and mysterious leader of this band, was visible on the stage, but even at close quarters, he seemed to be in disguise, hiding his face with a hat and a bushy beard. Mangum managed to maintain his enigmatic aura even as he was standing in front of twenty-thousand people. In the first minutes of the show, hundreds of people rushed forward for spots closer to the stage, shouting the words of songs from “In the Aeroplane Over the Sea,” an album whose devoted admirers multiplied many times over in the fifteen years Mangum and Neutral Milk Hotel went silent. People even moshed, not something you see every day at a folk-rock concert. Mangum has a strong, braying voice, which almost seems to command others to sing along. Unfortunately, the mix accented the harsh tones of his vocals and made his acoustic guitar sound like it was cranked up way past eleven. Coming and going from the stage, Mangum’s bandmates added all the horns, accordions and drums that made Neutral Milk Hotel’s records sound like surreal Salvation Army recitals. And when audience members lifted their voices in chorus with Mangum’s, Union Park became a giant hipster revival tent. (Robert Loerzel)