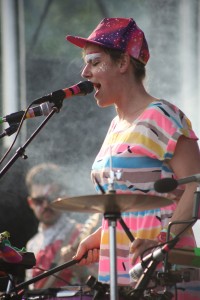 tUnE-yArDs is divisive, from Merrill Garbus’ elaborate face-paint/clothes, to the arguable-cultural appropriation of Afro-beat influences, to the frustratingly quirky spelling of the band’s name, even Garbus’ spacey greeting to the Pitchfork crowd (“Thanks for being a massive mass of massiveness!”) seemed to be a bit …put on. To be so boldly, messily experimental in pop can either speak to an audience uniquely or rub them the wrong way. It is not a surprise that for every “I ADORE tUnE-yArDs” comment I heard in the crowd, there were an almost equal number of “This is annoying as hell,” comments to balance it out.

But it’s hard to deny Garbus’ talent, even if you don’t “get it.” She stands out in a sea of indie-pop sameness, especially for women artists. Where delicate vocal styles are the norm, Garbus is often gruff—she yelps, growls and howls in a decidedly non-gendered way. (At least two people near me thought Garbus was male at first.) She fearlessly plays with styles and cultural influences/signifiers: call and response vocals, funk bass, Afro-beat and hip-hop influenced percussion. (Is it cultural appropriation or homage? That’s way too much to get into while typing on an iPad standing up.) But with a five-piece band format (including two backup singers), her audacious musical vision comes alive on stage, giving the listener a lot more to chew on. Even when it doesn’t work, it does work; it’s hard to ignore and almost always elicits a strong audience response, which indie-pop needs a lot more of. (Keidra Chaney)