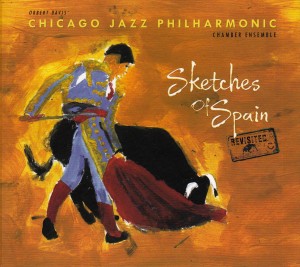 “Sketches of Spain” is a masterful collaboration by Miles Davis and Gil Evans that has been deconstructed, imitated and recreated by countless musicians over the years, but few have had the audacity to create a new adaptation that would include new material arranged for a philharmonic orchestra. But Chicago-born trumpeter, composer and arranger Orbert Davis (no relation to Miles) stepped up to the plate with a fantastic take on the classic.

The album begins with a seventeen-minute version of “Concierto de Aranjuez” that is faithful to Evans’ original arrangement but completely revisited for an orchestra format. The bandleader performs an accomplished solo that does not copy Miles Davis’ take but retains many of its sonic elements. “Muerte del Matador” is an original composition that begins with a subtle oud solo from Suzanne Osman, who is joined by the bandleader on flugelhorn. The tune then evolves into a syncopated format that includes many individual performances. “El Albaicin” blends classical and Spanish influences, and is entirely performed by a string quartet, which takes the album to a completely different direction. The music then returns to Evans territory with a twelve minute version of “Solea” that is focused on percussion and Orbert Davis’ accomplished trumpet improvisations.

“Sketches of Spain [Revisited]” is a masterful piece of work, and is certainly one for the ages. Make sure to listen to it with earphones (not ear buds) to experience all the subtleties of the arrangements and what is being played. Also pay attention to the artwork, which was drawn by young Chicago students based on their perception of what Spain was about. (Ernest Barteldes)