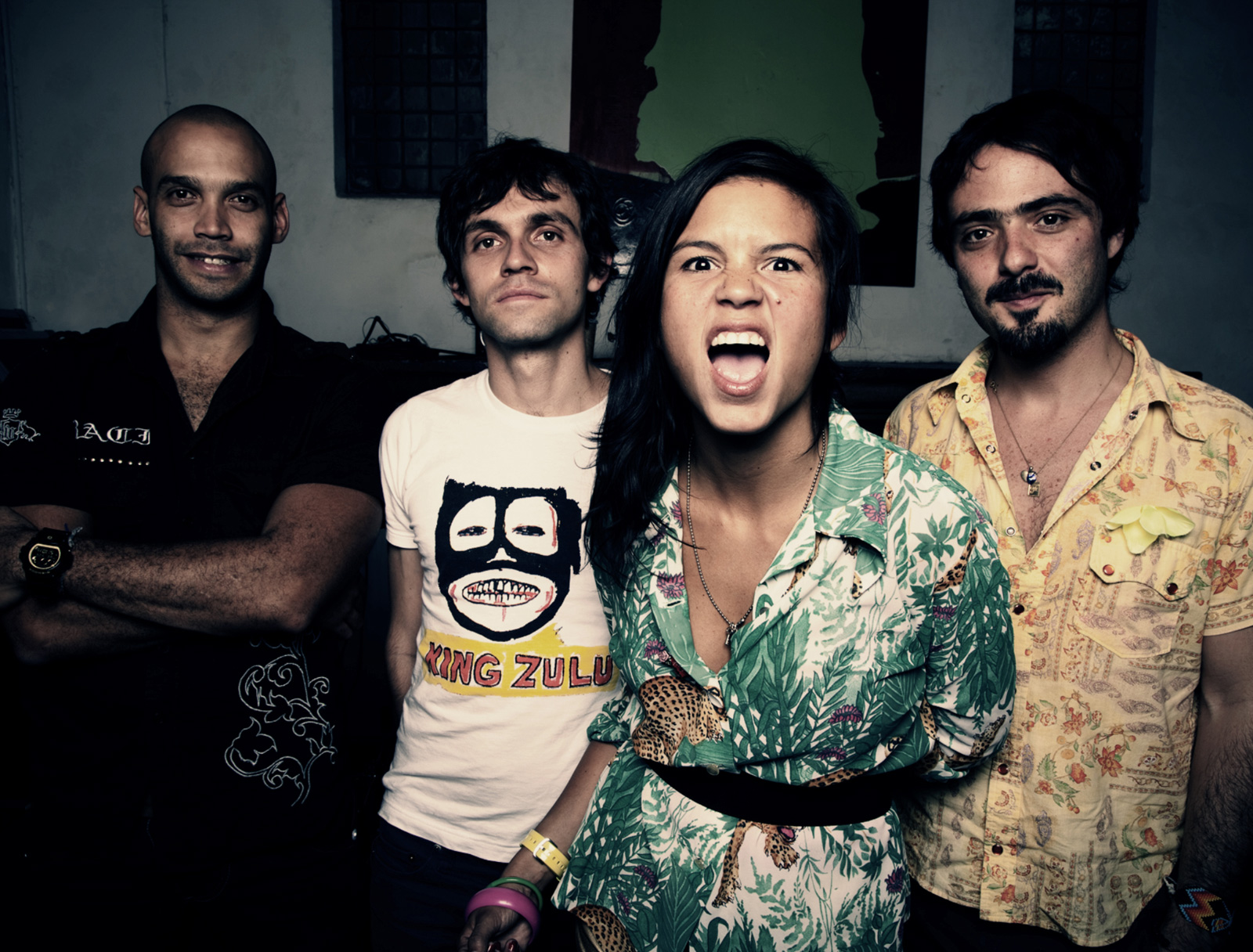 True, this year’s Lollapalooza is yet another chapter in the continual poppification of the “alternative rock” landscape, and the headliners bring to mind the clichéd phrase “been there, done that,” but like every year, there are a few quality acts that provide some tough choices to make.

1:45pm-2:45pm
Lucius
Palladia
Friday’s first tough choice features two Brooklyn acts that couldn’t be more different. Kick things off at noon with veteran punks The So So Glos unless you’re more in the mood for some highly refined dance pop. Classically trained Ellis Ludwig-Leone’s experimental pop project San Fermin goes on at 12:15pm and has the opportunity to fulfill the promise offered by his wildly creative (and all over the map) self-titled EP and the stellar single “Sonsick.” Given that Jess Wolfe and Holly Laessig guest on that breakout track, and their band, Lucius will follow on the same stage after a break, it’s no stretch to imagine they’ll be stepping up to the mic during San Fermin’s performance.

3:30pm-4:30pm
Warpaint
Lake Shore
Next, chill out to the reverb-heavy self-proclaimed “anti-folk” of Courtney Barnett and then the female foursome Warpaint, who on their second release got their “one and only choice” for producer, Flood and yet recorded much of the “Warpaint” live in the studio. If there’s a nexus between Joy Division, Mazzy Star, Northern State and Vivian Girls, they’ve found it, and it’s a sweet spot indeed.

4:30pm-5:30pm
Iggy Azalea
Perry’s
The dark pop neo-new wave troupe Interpol have a new record out, but it will have to be pretty strong to cause these feet to deviate from a path toward the idiosyncratic pop experience of Portugal. The Man or up-and-coming female rapper Iggy Azalea. Azalea is surrounded by a lot of buzz that will be hard to resist, especially given her work with Pusha T., BoB, Steve Aoki, Diplo, T.I. and opening slots for Beyonce and Nas. Meanwhile Portugal. The Man’s new record “Evil Friends” is their first work with producer (and serial collaborator Danger Mouse, see also, Broken Bells) and adds an electronic rhythmic intricacy to their trademark idiosyncratic pop. I’ll give Azalea the edge given the otherwise relative dearth of female hip-hop-portunities extant at Lollapalooza this year, and there’s still a chance to catch P.TM on the Kids stage from 2:05pm to 2:30pm earlier in the afternoon.

7:30pm-8:30pm
Lykke Li
Lake Shore
The shimmering electro-indie-pop-tronica of CHVRCHES should not be missed next, followed by the earnest and winsome tenor of The Shins’ James Mercer and musical electronic genius of Danger Mouse in their collaboration with Broken Bells, even if their most recent record was not as stellar as their debut. Swedish chanteuse Lykke Li, whose “I Never Learn” is her most stripped down and emotionally direct production to date, has already become a legendary live performer and I can’t wait to see how she delivers her newer acoustic material along with her earlier more electronic-based, more danceable music.

8:30pm-10:00pm
Arctic Monkeys
Bud Light
In terms of headliners this year, Eminem is one of many retreads, and even my fourteen-year-old son thought the same of his most recent record. The real choice Friday night is between New York darkwave duo Phantogram and British quartet Arctic Monkeys. The latter have yet to release a bad record, and “AM,” whose title was inspired by The Velvet Underground’s “VU,” is their strongest from beginning to end. While it lacks the youthful exuberance of their earlier work when they exhibited a plenitude of precociousness as teenage darlings of the histrionic British press, the maturity suits them and their sense of humor, a case in point being the single, “Why’d You Only Call Me When You’re High?”

Phantogram, on the other hand, have collaborated with Outkast’s Big Boi, The Flaming Lips, had a song featured in a “Hunger Games” movie and in the past year have gone from headlining Chicago’s comparatively minuscule Empty Bottle to competing against the Monkeys and Mr. Mathers, in what one can only imagine was a conversation in counter-programming and a need to perform during the dark or at least as close to the sunset as possible. Still, Phantogram’s innovative hip-hop-inspired trip-hop electronica has to be better suited to a small, dark venue, and my money’s on Arctic Monkeys to better command a larger stage, so they win this tough choice in the end.

2:45pm-3:45pm
Kate Nash
Bud Light
Parquet Courts are still relative new kids on the block but have already become legendary for their live shows, including stellar performances in 2013 at Pitchfork and in an aftershow at The Bottom Lounge, so if your hot button is garage rock with an avant-garde twist, this is a set not to miss. However, I can’t pass up a trip to Perry’s stage to cut a rug to the master of the wheels of steel, turntablist and sampler extraordinaire Z-Trip, and maybe by 2:45pm I’ll be danced out and can cool down to the sublime melodies and bitter sardonicism of British alto singer-songwriter Kate Nash.

4:15pm-5:15pm
Fitz and the Tantrums
Samsung Galaxy
L.A. sextet Fitz and The Tantrums never fail to bring a riveting soulsplosion to the live stage, so their catchy melodies and strong male-female co-lead vocals from tenor Fitz and soprano Noelle Scaggs will be a tough set to skip. Their “More Than Just A Dream” album put a shimmering pop sheen on their twenty-first-century soul approach but still captured their invigorating live energy.

5:45pm-6:45pm
Nas
Palladia
Unlike the Pitchfork Music Festival’s lineup this year, whose hip-hop selections tilted toward MCs whose talent was cramming as many obscenities and as much misogynist language into a forty-five-minute set as possible, (Kendrick Lamar excepted), Lollapalooza should be congratulated for corralling top-level talent in terms of hip-hop creativity and lyricism, and Nas exemplifies all of that and more. Expect the New York-born Nasir Bin Olu Dara Jones to properly celebrate the twentieth anniversary of his extraordinary breakthrough “Illmatic” as well as featuring tracks from his most recent release, “Life Is Good,” his tenth album and his sixth to debut at number one on the Billboard Top 200.

6:45pm-8:00pm
Spoon
Bud Light
Next up should be artful indie rocking quartet from Austin, Texas, Spoon. Characterized by Britt Daniel’s raspy lead tenor and their unique way of harnessing winning melodies and off-kilter grooves, Spoon could be Pavement without the shambling pace and distortion, Cake without the sense of humor. Every time I hear a Spoon record, I want to hear more Spoon records, and the same can be said for their side project Divine Fits and pretty much everything else the foursome touches.

8:15pm-10:00pm
Outkast
Samsung Galaxy
How about hopping back to some more hip-hop for a madcap nightcap in the form of a reunited Outkast? It’s no overstatement to say that the duo of Andre 3000 and Big Boi reinvented (and reinvigorated) hip-hop, nor is it an overstatement to call this the most highly anticipated reunion of 2014. Assuming they go on right on time, the majority of Lollapalooza attendees will get an hour and forty-five minutes, pretty much a concert-length set from these exuberant pioneers of sound and language.

1:00pm-1:45pm
Bomba Estéreo
Bud Light
After two days of Lollapalooza, and maybe some aftershows to boot, it might be a miracle if you can make it down there by 1pm, but if you can, Bomba Estéreo would kick your day off with an invigorating start. Formed by visual artist Simon Mejia, the first record was released in 2006 and featured the female MC Li Saumet rapping over some of the selections. The project quickly evolved into a collaboration between Mejia, who is now credited with playing bass, machines and musical direction and Saumet providing lead vocals, and they’ve since been joined by Kike Egurrola on drums and percussion and Julian Salazar on guitar and synthesizers. For sure the core foursome will giddily race through their unique melding of “alternative rock,” electronic dance music and tropicalia, the perfect fount of inspiration and perspiration for a hot and humid August day by Lake Michigan.

2:15pm-3:00pm
NONONO
The Grove
For a more northerly take on female-led EDM, say yes yes yes to NONONO (yes, I went there). The Swedish trio formed in 2012 and their first full-length is propelled by the strong single “Pumpin Blood.”

3:45pm-4:45pm
Run The Jewels
Palladia
Literally a killer collaboration between El-P and Killer Mike, Run The Jewels was a highlight of last year’s Pitchfork Music Festival, so even though the follow-up to their first record, released as a free download in 2013, hasn’t come out yet, if it’s anywhere near as good as the first one, it might even be worth buying, and this set should be another hip-hop highlight of this year’s Lolla.