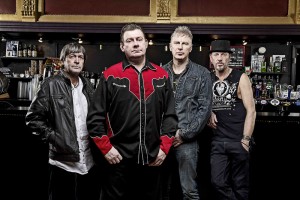 Stiff Little Fingers is a punk band originally from Belfast, Ireland that has been around since the second  UK punk wave—they formed just six months after the Sex Pistols, The Clash and The Damned.  Some of SLF’s best known work—”Tin Soldiers,” “Nobody’s Hero” and “Alternative Ulster”—-contains lyrics that hate hate:  advocating against war, violence, oppression, racial prejudice and class hatred.  Stiff Little Fingers’ influence lives on in more commercially successful descendants such as Green Day, The Offspring and Bad Religion.

Today, the band still exists with two of its four original members and recently released “No Going Back,” its first album in eleven years. The album just hit the charts in the UK at number fourteen, the band’s best performing material since the early eighties.

Jake Burns, the original snarling/shouting lead singer is now a Chicagoan–making the band twenty-five-percent local.  He discussed  the band’s history, relevance today and playing at Riot Fest in a recent interview.

How would you describe SLF to someone who is going to Riot Fest, and has never heard of you or your music?
We are a punk band that’s been doing it for thirty-seven years. We have always tried to play music that entertains, but means something in terms of social commentary.  Sometimes we are called a “Political” band, but I would say “political” with a small “p.” Certainly, we don’t play a lot of love songs.

Have the driving themes of your music changed over the years?
The themes we focus on—class distinctions, caring for one another, racism—are consistent. Those are the things that concern me most and those are the things that we can change. We can’t cure cancer. We live in America, where there are people sleeping in cardboard boxes. They are all things that offend my sense of justice. This is fixable!

Are you more optimistic about the world than you were back in 1978?
I don’t think so to be honest. People really are polarized. People that have things want to hold on to them.The “Greed is Good” mentality has come back again. That kind of selfishness is pretty dismaying.

You have seen touring bands that you influenced—Green Day, Offspring, Pennywise and Bad Religion. How does that feel?
It is very flattering. Green Day had us open their tour in Australia, and it was amazing to see them standing on the side of the stage watching our whole show. One of the guys from Pennywise told us he got his first fake ID so he could get into one of our shows. That’s some kind of influence.

What can old punks teach new generations?
When we started, the music was seen as outside of the mainstream, sort of “rebel” music, and we were not all about pleasing the public or selling anything.  Now punk rock, for better than not, has become part of the entertainment industry. And most “punk rockers” today are more about making party songs. At the end of the day, we are there to entertain people, we are not university lecturers—ultimately. But we can show people that the words are more important and older punks are not shy about saying things.

What can you say about the longevity of punk rock?
As the Clash said in “Complete Control” about what was said about punk and them—”They Ain’t Gonna Last.” One truism we’ve discovered is that it [punk] never goes away. Punk rock really does seem to be a life choice. It’s not just another t-shirt. You are buying a whole set of principles, and after you get past the outward appearances, I have found “punks” to be some of the most honest, gentle, solid, nice and polite people you will ever meet.

With a new record out, at Riotfest should we expect to hear the new album or your punk standards?
Riot Fest is one of the best festivals, and I am glad to play again before a hometown crowd. Because it is a festival it is more of a celebration, sets are shorter and although some may have come to see us, people are not necessarily coming only to hear us play and some may not even be aware of us at all—so it is not the platform to play the new record. We may play one new song, but we will focus on the Riot Fest theme and play more of our older material.

Stiff Little Fingers performs at Riot Fest in Humboldt Park and an aftershow with Cock Sparrer at Concord Hall at 9:30pm on Friday September 12.