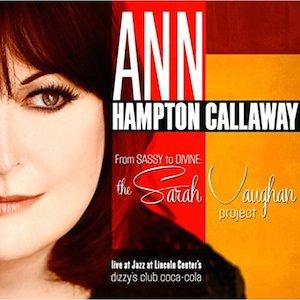 On her live tribute to Sarah Vaughan recorded at New York’s Dizzy’s Club Coca-Cola, the Chicago-born singer, composer and arranger (known by the general public for the theme of the popular sitcom “The Nanny”) assembled a topnotch band formed by  Ted Rosenthal (piano), Dean Johnson (bass), Tim Horner (drums), Randy Sandke (trumpet and flugelhorn) and Dick Oatts (saxes and flute). The repertoire included tunes that Vaughan recorded throughout her long career.

The disc opens after a brief introduction with a lively rendition of Al Hoffman’s “I’m Gonna Live ‘Till I Die,” which features a lengthy, highly inspired solo from Sandke (incidentally, Hoffman was the composer of “Bear Down, Chicago Bears”). Steven Sondheim’s “Send In The Clowns” is played with great dramatic flair, a little reminiscent of Barbra Streisand’s version. Also notable are Antonio Carlos Jobim’s “Wave” performed in a downtempo bossa style and Adler/Rose “Whatever Lola Wants,” a sexy blues-tinged number that showcases the vocalist’s improvisations, while George Gershwin’s classic ballad “Someone To Watch Over Me” features its often-ignored introduction.

The audio mix is superb—none of the instruments seem to sound amiss, and you can hear the general atmosphere at the gig—including some chuckles from the audience during a section of “Whatever Lola Wants.” Wherever she is, Vaughan certainly had a smile on her face when this was performed. (Ernest Barteldes)