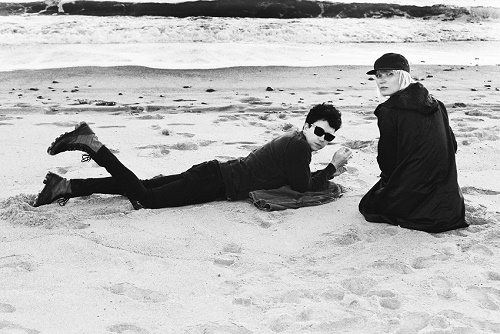 Sounding a bit like their name, the Raveonettes channel a variety of influences from fifties groups the Shangri-Las and the Everly Brothers to hazy feedback noise like the Jesus and Mary Chain. This is not surprising in that the band is produced and managed by Richard Gottehrer—a seventy-four-year-old writer/producer/impresario who, among other things wrote “My Boyfriend’s Back” and produced Blondie, The Go-Go’s and The Dum Dum Girls.

But don’t expect only girl-group sugar pop. The duo’s music, usually with a live drummer, alternately haunts and assaults your senses. On top of harmonic and ethereal vocals with dark lyrics, Sune Rose Wagner delivers a full range of guitar mania from clear surf chords to shredding chaos (their encores typically devolve into full-out feedback and noise). The beat is just short of danceable, but will move (march?) you a bit more than head-nodding shoegaze would.

Through it all, Sharin Foo is a stoic presence who could be comfortable playing the lead role in an Ingmar Bergman film. Originally from Denmark, this duo is now based in LA and touring to support its seventh and latest full album release “Pe’ahi.” (Bart Lazar)