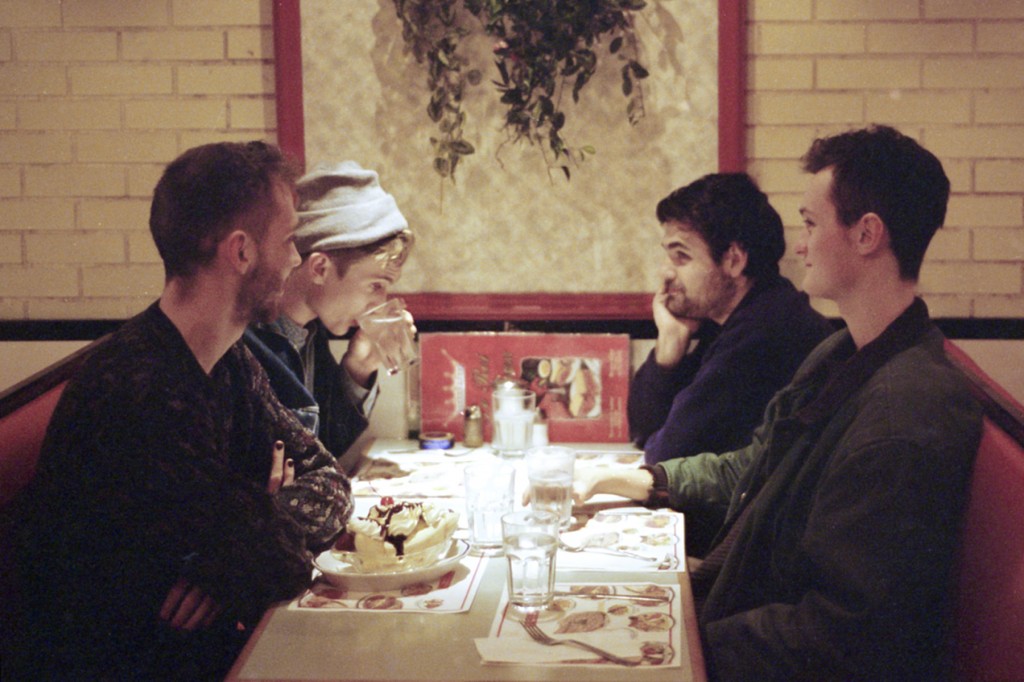 Ought’s debut LP, “More Than Any Other Day,” begins with a track called “Pleasant Heart” that’s led by an instrumental which inspires anything but its title. Its shaggy, stabby guitar and mathematically puzzling drumming take us to singer/guitarist Tim Beeler’s Kinsella-esque howling as the track unravels into a dissonant string-led soundscape.

But Ought manages to feel warm and familiar—endearing; cute, even—in their angst. A clarion of believable hope always emerges from its darkness. The band’s plainly existential lyrics and daring style have drawn easy comparisons to The Velvet Underground and Talking Heads, but it’s their charm which makes these similes most possible. Their character is big enough to mention them as carriers of a long, great, lively pop lineage.

It’s Ought’s humanity that stands tallest at the Empty Bottle on a Saturday night in September. As Beeler somehow balances the dual personalities of his voice and guitar, the crowd shuffles closer to the stage with air-hugs and smiles, like they’d just really like to have a beer with these fellows who anthemically shout about being “excited for the milk of human kindness.”

Positivity is hard in rock ‘n’ roll and life, and this international band (very young men from both sides of America and also Australia, who now all call Montreal home) has it in bushels. “Habit,” the standout track from “Day,” is the soundtrack for how beautiful it is to form mundane new disciplines. Beeler croons with intense desperation about “a habit forming” next to his hopeful cry that he’s “not alone anymore.” Fans of the genesis of emo should feel at home with their work upon a cursory listen, but Ought has reformed an ambling, naked aesthetic of rock from a predictable podium for sadness into a captivating stage for self-help.

Like the Velvets they evoke, Ought is a band who may be too quirky to pull millions of listeners into their front door—but none will leave without giving over their fandom. Destined for cult attention, their forthcoming EP “Once More With Feeling,” to be released by Montreal’s Constellation Records as “Day” was, features an indelible closing number “Waiting” that stumbles over itself with ragged joy. “I don’t even know what to say,” Beeler sings, “What what when and why and how,” he says, before his voice becomes almost wordless in its blurry, yowled excitement about finally falling in love.

“I retain the right to be disgusted by life, I retain the right to be in love with everything in sight,” Beeler sings toward the end of the Chicago set, putting the appeal of his music into simple words. Ought sounds the part of a crew capable of bad, bad pain and groveling to God in the name of emotional misfortune—one of music’s most tested traditions—but they choose instead to be ceaseless lovers of all that’s alive. Not every hurt animal has to stay that way, and Ought’s inspiring effort to always make their sad songs better has them on the rise. (John Wilmes)

“Once More With Feeling” will be released on October 28.