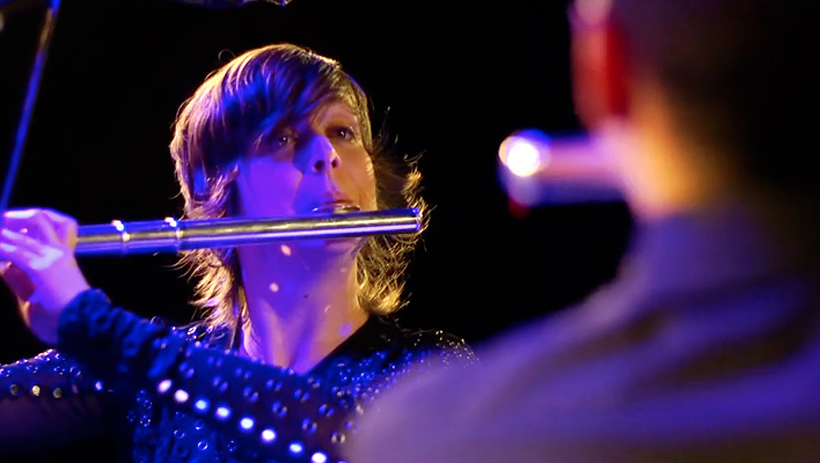 Since 2013, flutist and International Contemporary Ensemble founder and artistic director Claire Chase has been on active search of a new “Density,” a reference to Edgard Varèse’s 1936 seminal flute piece “Density 21.5” (the title referred to the density of platinum, a premium flute material) a revolutionary piece of music that “forever changed the definition of the flute, humankind’s oldest instrument.”

Chase is looking to have commissioned and premiered the twenty-first-century equivalent of “Density” before the work’s centennial in 2036, at which time Chase will be fifty-eight. Chase’s search thus far has led her to offer world premieres of more then one-hundred new works for flute, many written specifically for her.

“Density 2036: part ii” presents a seventy-minute program of new works for flute and electronics (Levy Lorenzo, engineer) by George Lewis, Matthias Pintscher, Felipe Lara, Mario Diaz de León and Du Yun as Chase offers her first solo performance as Northwestern University’s Bienen School’s Institute for New Music’s 2014-15 resident artist. At $8 a ticket ($5 for students with ID) and with Varèse’s “Density” included as a finale along with a post-concert Q&A with Chase, that is a density deal. November 5, 7:30pm, Lutkin Hall, 700 University Place, Evanston, (847)467-4000.

Lyric Laughs at Its Age
November 1, 1954 was the date that Lyric Theatre of Chicago, later Lyric Opera of Chicago, came into being and the company is celebrating with a one-night-only all-star 60th Anniversary Concert and Diamond Ball on the actual anniversary date. The tone looks to be light and celebratory rather than the more formal affair that commemorated the company’s fiftieth anniversary a decade ago, since which some key company figures and artists associated with Lyric’s early years have passed away.

Emmy Award-winning actress Jane Lynch, who plays coach Sue Sylvester on the television series “Glee,” will serve as master of ceremonies and Second City will present a series of skits across the evening. Renée Fleming will traverse “Over the Rainbow” with jazz pianist Ramsey Lewis as accompanist and Eric Owens will sing “Ol’ Man River.” 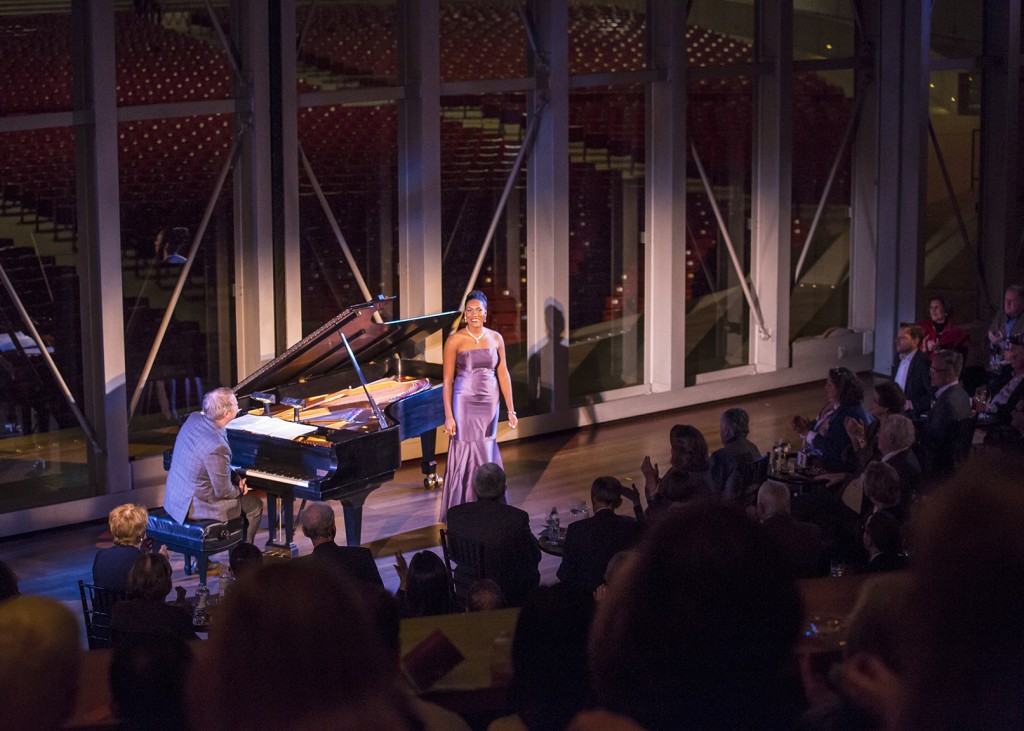 Beyond the Aria: J’nai Bridges with Craig Terry/Photo: Marcin Cymmer.

“What we ended up with was something that combined both,” says Terry, the curator, artistic advisor and accompanist of the series. Each concert spotlights two internationally known opera singers concurrently performing in Lyric Opera productions, appearing alongside of a current member of the Ryan Center.

“I asked that everyone love the songs that they sing,” says Terry, “and we wanted the experience to be more relaxed than a regular concert hall. I had played on the Pritzker stage and it really is the perfect space: the idea is the rare pleasure to hear really great singers up close and personal in an intimate space.”

Tabla master and Indian percussionist Kalyan Pathak will collaborate with sarod player Datta and Fulcrum Point founder/conductor/trumpeter Stephen Burns for the improvisational work “Rageshri” and will perform his own work  joined by his own ensemble, the Jazz Mata Trio. The program will conclude with Shirish Korde’s “Lalit,” a duet for flute and tabla featuring Pathak and Fulcrum Point flutist Mary Stolper. November 1, 7:30pm, Millennium Park’s Harris Theater, 205 East Randolph, (312)334-7777. $20 ($10 for students).

Notable Excursions
Guitarist extraordinaire John Abercrombie will perform with his revised quartet, which includes pianist Marc Copland, bassist Drew Gress and drummer Joey Baron, the same personnel on Abercrombie’s latest album, “39 Steps.” Abercrombie and Copland were both members of the Chico Hamilton Quartet and the fusion jazz-rock group Dreams back in the 1970s, but both have returned to more straight-ahead jazz as this group reflects. October 30-November 2, Jazz Showcase, 806 South Plymouth, (312)360-0234, from $20.

Attempting to fuse arts, science and culture in the seventeenth and eighteenth centuries is the object of “The Galileo Project: Music of the Spheres” with the Canadian period instrument ensemble Tafelmusik. Narration, choreography and music by Monteverdi, Vivaldi, Bach and Handel will be performed to a backdrop of high-definition images from the Hubble telescope. November 7, 7:30pm, University of Chicago’s Logan Center, 915 East 60th, (773)702-2787, $35 ($5 students with ID).

Newberry Consort’s “Música Barocca Mexicana” features eighteenth-century music of the New World for voices, violins, guitar, theorbo, harpsichord and cello reconstructed as performed at the cathedral in Durango, one of Mexico’s important music centers. Newly discovered masterpieces are included with many U.S. premieres of works by Ignacio Jerusalem, Santiago Billoni, Manuel de Sumaya and others. November 7-9, various locales, (773)669-7335, from $35.

Following up on its traversal of a complete Beethoven string quartet cycle two years ago and a complete Bartók string quartet cycle last season, this year the gifted and energetic Avalon Quartet is performing a complete Brahms string quartet cycle at the Art Institute. This exquisite Sunday afternoon series includes other pieces that influenced—or have been influenced by—Brahms, followed by illuminating gallery walks that tie together revolutions in music, painting and sculpture. Brahms Quartet No. 3, Op. 67 in B-flat Major and the Debussy Quartet are the pairings in this second of a four-concert season-long series. November 9, 2pm, Fullerton Hall, 111 South Michigan, (312)443-3600, free with museum admission.