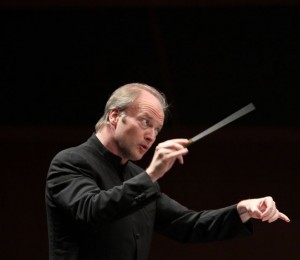 For the first time, Millennium Park’s Harris Theater is presenting an opera independent from Chicago Opera Theater, a mainstay of the venue since it opened more than a decade ago. The one-night-only event features a rare, complete concert performance of Rossini’s “William Tell” by Teatro Regio Torino (Turin, Italy), in the company’s North American debut. This is the first time an Italian opera house will tour a complete opera in North America. Chicago is one of only four stops on the tour, which also includes Carnegie Hall. Baritone Luca Salsi sings the title role, with soprano Angela Meade as Matilde and tenor John Osborn as Arnoldo. The Teatro Regio Torino orchestra and chorus is conducted by the company’s music director, Gianandrea Noseda, who was just chosen as Musical America’s 2015 Conductor of the Year.

“Grazie,” says Noseda, congratulated by phone in Munich, where at press time he was guest conductor at the Bavarian State Orchestra. Ironically, although Noseda’s season-long engagements with Teatro Regio Torino were never in question, reports had surfaced that he’d stepped aside as music director due to highly publicized artistic differences with the company’s general manager. “I am still there,” he reassures me. He calls the mutual striving for both sides to come to an understanding “a work in progress,” and adds, “There are new people coming in [to the company], who I think will make all the difference. We will find our way. At least that is my wish, my hope.”

The choice of “William Tell” for Noseda and forces to take on tour is particularly curious: on the one hand, the cavalry section of its famous overture is some of the most internationally popular and instantly recognizable music in all of Italian opera, having been used as the theme for “The Lone Ranger” on radio and television (“Hi-yo, Silver—Away!”). On the other hand, as a full work Rossini’s final opera is virtually unknown, especially in the States. In Lyric Opera’s sixty-year history, for instance, “William Tell” has never been staged. “It is a very long work,” admits Noseda; “four hours, so even in Italy you have to make some cuts to make it more acceptable and enjoyable for the audience. And the vocal writing is so difficult, especially for the tenor, that it has always been very hard to cast. But now we have three or four singers in the world who can sing these roles.

“With its many possibilities for a chorus and orchestra to shine, it is the perfect work for an Italian opera company to showcase one of the greatest Italian operas, that also prepared the way for the young Verdi and the future of Italian opera. It has some of the most complex, rich, refined and visionary music, pure magic: it really does seduce you. And yet there are elements of the lightness that we love and associate with Rossini, who after writing thirty-nine operas never wrote for the form again after this, as he found he had summed up everything he wanted to say.”

The original version of “William Tell” was written in French for the Paris Opera but was later translated into an Italian version that has been controversial ever since. “We are using the revised Paolo Cattelan version that [Riccardo] Muti did [at La Scala] in 1988, where the words line up much closer to the length of the notes,” says Noseda.

Noseda feels solidarity with frustrations Muti has expressed about conducting opera in their native Italy, where opera companies continue to make artistic cuts left and right. In a move that made headlines, Muti withdrew from performances at the Rome Opera that would have been concurrent with Noseda’s North American tour. Is it something in the water over there?

“Or maybe the coffee, or maybe too much coffee,” laughs Noseda. “Opera is one of our cultural jewels, like fashion, cars, food and wine. It represents values we can be proud of and that belong not just to Italy, but to the world. It is important that we [Italians] fully value what we have.” December 3, 7pm, Harris Theater, 205 East Randolph, (312)334-7777. 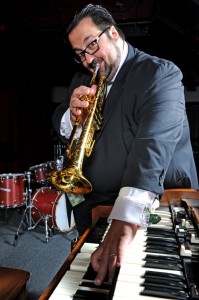 Thankful for a New Band and Album
Jazz organist Joey DeFrancesco is spending the holiday weekend in Chicago; he’ll open at the Jazz Showcase Thanksgiving night and play through Sunday. His current band was formed at the Showcase last Thanksgiving, and features two Chicago players—drummer George Fludas and guitarist Jeff Parker—so these gigs represent an anniversary of that lineup.

Fludas and Parker are also featured on DeFrancesco’s new Christmas double album, “Home for the Holidays” (JDM Music), whose tunes will feature prominently in the group’s Showcase sets.

“Thanksgiving in the States has really been the opening of the Christmas season ever since I was a little boy,” says DeFrancesco, who is now forty-three. “That’s when we would put our tree up. Whenever this time of year would come around, it was always exciting to play these songs because they’re really great tunes. They’re like standards, they have nice changes in them.

“There are different things happening, but I keep the melody very strict so that people can sing along. That’s important, that’s the whole point of these type of songs. The real crazy things start to happen when we get into the solos. I did some arrangements, but nothing so far out of the box that people won’t recognize the song—no different time signatures.”

DeFrancesco is such a holiday-repertoire enthusiast that the album features no less than twenty-three tracks. One disc, devoted to secular songs, is dubbed “The Party;” the other, devoted to sacred songs, is called “The Tradition.” DeFrancesco even sings, blows trumpet and plays piano on a few of the cuts.

Unlike so many artists who go through the motions of producing an obligatory Christmas album, DeFrancesco invested “a lot of thought and effort” to his entry in the genre. “Whenever I would be touring the first couple of weeks of December, it was a natural thing to start playing holiday songs and people would always love it. And every year people would ask, ‘Do you have a Christmas album out?’ We finally did it. It’s fun to be able to go out on tour now and play these songs, and be able to offer people something to take home with them and enjoy over the holidays with their family as well.” November 27-30, Jazz Showcase, 806 South Plymouth, (312)360-0234. 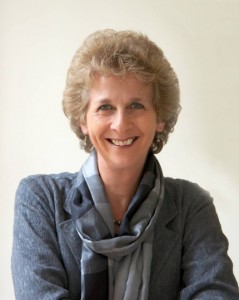 Do Not Open Until Before Christmas
Bach may have written his jubilant, six-part “Christmas Oratorio” for the period between Christmas Day and Epiphany (January 6), but Music of the Baroque is presenting the epic work just as Thanksgiving weekend ends and Advent begins.

“The trouble is timing,” admits MOB music director Jane Glover, who will conduct the performances. “It is often difficult to schedule it at an appropriate time of year: obviously, you can’t do it in July.” One problem is that MOB’s own Holiday Brass and Choral Concerts, which occur in mid-December, are already “very, very popular.” And since most of the players come from Lyric Opera or the Chicago Symphony Orchestra, “already our scheduling is a bit of a nightmare, to weave a path between those two mighty organizations.”

The solution? For this year, at least, “a double dose of holiday music spread liberally throughout the season,” says Glover. “In my country [England], we don’t have Thanksgiving, sadly. It is a wonderful holiday. It’s not commercial, it’s just about family and friends, isn’t it? It’s lovely. Christmas has become so commercial: I love Christmas, but it has become quite vulgar. One of the best things about Christmas is the music.”

When it comes to the “Christmas Oratorio,” “every movement has a different configuration of singers and instruments, so you have to work out an immense battle campaign of rehearsal and then fit that into the Rubik’s cube of the scheduling issues.”

When Glover conducted her first MOB “Christmas Oratorio” four years ago, “it went down so well, we had fabulous audiences, a fabulous reception. People kept saying that we should do it every year. If only we could: it is an immense undertaking. Yet it is such a joy. You cannot help but be drawn into the genius of the man, the storytelling and the spiritual journey that every member of the audience takes.” November 30 (North Shore Center for the Performing Arts, 9501 Skokie Boulevard, Skokie), December 1 (Harris Theater, 205 East Randolph), (312)551-1414.