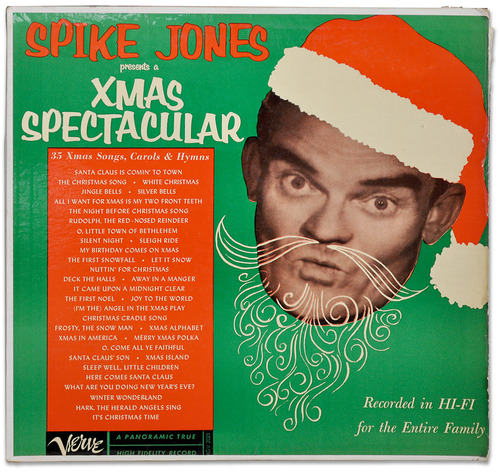 The worst English-language song ever recorded—worse than the Brad Paisley/LL Cool J collaboration “Accidental Racist,” that U2 song about Joey Ramone, and the whole of the fun. catalogue—is a Christmas song called “All I Want for Christmas Is My Two Front Teeth.”

Covered by numerous artists over the years, including noted musical genius Count von Count of Sesame Street, it was originally—and most famously—performed by Spike Jones and His City Slickers. Like all its iterations, Jones’ version of the holiday hit is willfully obnoxious, combining the grating sonic palette of the Chipmunks (who covered this crime against music in 1963) with the jejune comedic stylings of a bad Three Stooges flick (unsurprisingly, Larry, Curly and Moe recorded a version of the song as well). Opening with a brief skit in which the song’s protagonist is relieved of his incisors in a careless bicycle accident, trumpeter George Rock—singing as the toothless adolescent—laments his newfound inability to pronounce sibilants without whistling. It is a ridiculous song, and I hate it.

The first time I heard it, it was on this tape of Christmas music my grandfather had dubbed off the radio and his old, immaculately kept records. He played this tape every year and, more than snow, corner Santas and the mathematical elimination of the Bears from the NFL playoff picture, it signaled to me the arrival of the holiday season.

Ninety-seven percent of the tape is amazing: Frank Sinatra, Bing Crosby and Nat King Cole crooning depressing-ass ballads about longing and heartache and distance both real and abstract. This is the kind of Christmas music I like. Some will tell you that ‘tis the season to be merry, but the truth is that whatever “magic” the season can be said to have is inextricably bound up in its melancholy, and the best and most meaningful art about the holidays—from “A Christmas Carol” to Charlie Brown to “Have Yourself a Merry Little Christmas”—reflects this.

Songs like “All I Want For Christmas Is My Two Front Teeth,” or this bizarre kazoo version of “Jingle Bells” that also appears on the tape, express a kind of unbridled merriness that I maybe felt as a kid, but that is just about impossible to conjure up as an adult. Where “it’s the most wonderful time of the year” probably summed up my feelings toward the holidays pretty well as a kid, lines like “Through the years, we all will be together if the fates allow” better represent how I feel nowadays.

My grandfather died in June. I’ve been driving his car since. When I popped the tape in recently, and that song came on, I laughed and said: “God damn it, grandpa,” as though he were riding in the passenger seat. He was a working-class Chicagoan—a man of responsibility, but also secretly a goof, finding little funnier than Basil Fawlty thumping Manuel on the back of the head with a frying pan or John Wayne and Victor McLaglen brawling their way across the Irish countryside. There was no irony in his humor—no irony in him whatsoever, in fact—and this “All I Want For Christmas Is My Two Front Teeth” business was right in his wheelhouse. I can still sort of hear him quoting the beginning of the song, where the kid yells—in that “aw shucks” voice all boys born before 1955 apparently spoke in—“Look ma, no hands!” before crashing his bike.

I’m never going to like that song. It’s fucking terrible—a worse musical crime than even the sonically felonious Robin Thicke could commit. But the fact that my grandfather was, I feel, probably the only person in the known universe to not hate it means something to me. I’m just not sure what it is yet.