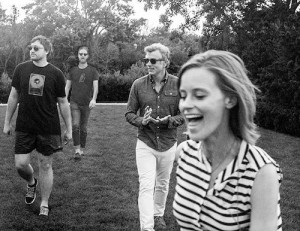 Here we are at the end of the year, and while most music journalists will inflict their top-ten bands/albums/live shows of 2014 lists on their readers, I’ve decided to spare you. There’s still enough time, after all, to catch the best show of the year, or even check out a new band or album that might be your favorite. There have been two or three times that my favorite concert of a given year took place during the last six weeks on the calendar (I’m looking at you, St Vincent!). This is especially true with the holidays approaching; Chicago is fond of its Christmas and pre-New Year’s live music showcases and events. Either way, there’s still a lot going on in the city when it comes to live music. Here are a few standouts.

The Empty Bottle (1035 North Western) is all up in Christmas this month, with a whole slew of Christmas and Christmas-ish events to celebrate the holiday. On December 12, they’re throwing their second annual Bottle Hop to raise money for the Greater Chicago Food Depository. It’s an old-school rock ‘n’ roll/soul/R&B shindig, which makes it a perfect opportunity to dress kinda fancy. The lineup includes badass throwback soul band The Congregation (on the verge of very big things, I predict), fifties rockers The Tenders and western swing outfit The Chandelier Swingers. The show is $10 and starts at 9pm.

If that’s too much live music for you, the Bottle also hosts a pair of lunch-hour events in time for Christmas shopping: a poster sale on December 14 and a pop-up holiday market on December 20.

Over at The Burlington Bar (3425 West Fullerton), the Logan Square establishment celebrates the season on December 13 with a yuletide lineup of pretty intense rock. The roster includes what’s being billed as the “holiday version” of avant-metal outfit Bloodiest (not really sure what that means; I assume all will be revealed in time), along with Xmas on Easter Island and up-and-coming shoegazers Forgotten Species. The latter recently released an EP, “Hades Fades,” which is a surprisingly tight work for a newish band, until you learn that the members are all vets of the local scene. Forgotten Species have had an eventful few weeks, beginning at Schubas with a record-release party that technically wasn’t (printing delays have put off the shipping date until mid-January), but they’re still riding high on a near-sellout show and an EP (available on Bandcamp) that’s getting a lot of positive buzz. I dropped a line to bassist Lizz Pietrus about what to expect from the Burlington Christmas show, and she quipped “We’re planning a holiday cover or two. And since we had no records to sell at the Schubas show, we’re a little short on cash so we could only afford one elf costume. The next two weeks will be spent on a full-band competition to see who gets to wear the elf costume, because the rest of us will have to wear our Halloween costumes from last year.” Keep an eye on Forgotten Species in 2015; they’ve got some pretty exciting plans, including a new EP (they’re recording in January) and some possible festival gigs. The Burlington Bar Christmas show starts at 8pm.

Speaking of successful years, psych-metallers Mount Salem wrap up an impressive 2014 with a December 19 show at Reggies Rock Club (2109 South State), opening for The Skull. The band signed to Metal Blade earlier this year, re-released their 2013 EP “Endless” as a vinyl LP with additional new tracks, and recently embarked on a European tour. Mount Salem formed in 2012 and quickly developed a following with their bluesy, stoner-rock-influenced sound. It helps that singer/organist Emily Kopplin is a golden-throated vocalist who stands out in a sea of guttural sameness. The show starts at 7:30pm; tickets are $10/$15 d.o.s.

In the past year or so, Wicker Park’s Emporium Arcade Bar (1366 North Milwaukee) has become a great live music destination with edgy and interesting booking choices (i.e. music that tends to be a little geekier and weirder than the usual power-pop/bar-rock offerings). Starting December 12, spooky synth band Terrible Spaceship starts a “winter residency” on the second Friday of each month, through February 13. That’s plenty of time to make plans to catch their awesomely peculiar blend of video-game music, old sci-fi movie scores, and eighties hip-hop sounds. Trust me, it’s worth checking out, possibly more than once. Check out Emporium’s events page for information on show start times and openers.