Ringing in the New Year with the New Philharmonic has become such a popular tradition in the western suburbs that this December 31, the College of DuPage-based professional orchestra is adding a third pops concert at its newly renovated concert hall, the McAninch Arts Center.

“The tradition began as an experiment,” explains New Philharmonic music director Kirk Muspratt. “People are always looking for something to do on New Year’s Eve, so my feeling was that we should try a classy event, something very intelligent and fun, using the Vienna Philharmonic New Year’s concerts as a model.”

The nine o’clock debut concert sold out so quickly that a second five o’clock concert was added the following year. “We tried offering two concerts for three or four years,” says Muspratt, “but we were still always leaving two-hundred people out in the cold waiting for tickets.” Thus, the thought to add a third concert this year, at one o’clock in the afternoon.

Muspratt admits that what began as a Vienna template has evolved into something far more eclectic. “I went to school in Vienna at the Conservatory, so am very at home in that tradition. We originally did light classical: some Lehár, some Johann Strauss, maybe some Rossini. Little by little, as the audience responded to new things, the thinking broadened and it was like, ‘Let’s have a little French twist,’ and we’d add some Saint-Saëns. Then we began doing some American things that were very well received. People like the mix, the variety and it has evolved into a pastiche of music.”

Adding to the popularity of the concerts is that WFMT FM 98.7 began broadcasting the late-afternoon performance live, as it will do again this year.

In addition to traditional waltzes and polkas, this year the music of Erich Wolfgang Korngold will be featured (“There’s nothing more heart-ripping and serious,” says Muspratt), as will the film music of Max Steiner, Elmer Bernstein, Michael Kamen, James Horner and John Williams—along with “Auld Lang Syne,” a balloon drop, a champagne toast and surprise encores.

“I talk a lot to the audience,” says Muspratt, “I try to make sure everything is fun and of a nuanced, first-class quality that you could hear anywhere in the world. The singers are people from Lyric Opera’s Ryan program, topnotch people. It’s a great night. A lot of joy, a lot of banter, I play tricks on the audience, but nice tricks.”

For those who may have experienced Muspratt conducting the New Philharmonic during its regular season, when the musical fare is more substantial, these festive concerts manage to crystallize in a single experience the celebratory manner that has become his signature. “My mission is to connect with the audience and make the room feel like one.” December 31, 1pm, 5pm, 9pm, College of DuPage’s McAninch Arts Center, 425 Fawell, Glen Ellyn, (630)942-4000. 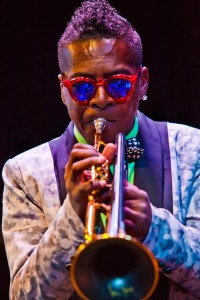 Hargrove for the Holidays

It speaks volumes that an artist who can fill up concert halls virtually anywhere makes a point of spending the last week of every year playing a club in Chicago.

“I’m definitely thankful that Joe Segal is still up and running,” says trumpeter Roy Hargrove of the Jazz Showcase, which has hosted Hargrove and his quintet from the day after Christmas on into the New Year for the past four years. “There’s not a lot of clubs that showcase acoustic jazz like that. I’m glad that he’s still there and we have a place to go.”

Hargrove is known for his extraordinary facility across a variety of musical styles; yet he says, “I do believe in tradition and I think that acoustic music is something that needs a lot of lifeblood right now because there are not very many people doing it. And it is also quite challenging to be able to get to people with nothing but the bare necessities. And you know,” he adds laughing, “I like challenges.”

Another attraction for Hargrove is the complete freedom he has in a club environment such as the Showcase. “We play standards, we play original music, music from me, music from the rest of the guys. But I don’t really know exactly what we’re going to do until I get there and get a feel for what the audience wants to hear. Once we get into the room and we play a couple of tunes, I’ll get a feel for what the atmosphere is like and I’ll go from there. I’ve been writing a little bit, some of the other guys have been writing. The band just keeps getting tighter because we play a lot on the road. That’s what it’s about.”

Now forty-five, Hargrove, who not so long ago was a young prodigy himself, finds younger players coming to him to learn from him the way he did with veteran players. “I always tell them: listen to Clifford Brown, Fats Navarro, Kenny Dorham. Everything I have picked up I try to pass on to the cats I come across, mostly the guys that are in my group. I tell the guys all the time, one of the main things is ear training. If you can play what you hear, you can pretty much do anything you want. It’s a matter of getting that marriage to your instrument to where it’s like your right hand where you can play anything you can hear. A lot of times players have great command and wonderful technique, but they don’t really know their horn that well to the point if they hear something, they can just play it.”

As for the future of jazz, Hargrove says “it’s probably at a point now where it’s a minority and it’s very rare, but it’s still alive and there’s still a lot of great young players trying to learn how to play. I was just at Duke University, and I heard a female drummer there who couldn’t have been more than nineteen, she was magnificent. There’s always players coming up, and there’s always veterans like Jimmy Heath, Roy Haynes, Sonny Rollins. So the music is always going to be something that we learn from.” December 26-January 4, Jazz Showcase, 806 South Plymouth, (312)360-0234.