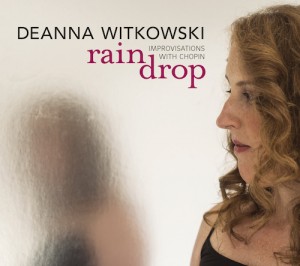 On the solo piano “Raindrop,” Witkowski, a former Chicago jazzer, approaches Chopin’s music from a creative point of view—not so much reverent as playful. She begins with a straight take on the downtempo Romantic piece “Nocturne in E-Flat Major,” employing her classical training to convey her interpretation, rather than relying on embellishments. But immediately afterward she launches into “Walking the Labyrinth,” an original composition inspired by the nocturne and created on the spot—a complete improvisation.

As a specialist in Brazilian music (full disclosure: she has sat in with my band), Witkowski demonstrates how Chopin inspired the likes of Antonio Carlos Jobim and Luiz Bonfá. These two bossa nova-era composers were both classically trained, and borrowed from the master for some of the works that would immortalize them. An example is “Prelude in E Minor,” a piece whose basic melodic structure was used by Jobim to compose “Insensatez” (a tune made famous by Frank Sinatra as “How Insensitive”). Witkowski begins with the Chopin composition, then easily gravitates into Jobim’s song. She does the same with “Nocturne in E Minor,” which segues into Bonfa’s “Manhã de Carnaval” (known Stateside as “A Day In The Life of A Fool”). Who knew that a nineteenth-century Polish composer contributed to the musical revolution that put Brazil on the map of jazz?

Witkowski’s improvisations serve as interludes between the main pieces, weaving them together nicely, and finding her in both bossa-nova and classical modes. It’s a wonderful showcase for her versatility (she also plays sacred music) and her ability to tack between genres. (Ernest Barteldes)