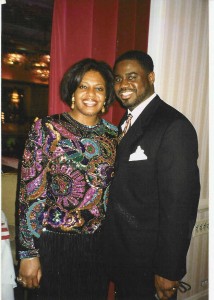 “We’re both preachers’ kids,” says soprano Alfreda Burke of herself and husband, tenor Rodrick Dixon. “And as classical singers, we had both done our share of traditional Handel ‘Messiah’ performances.”

For the past ten years, however, the couple has been headlining the “Too Hot to Handel: A Jazz-Gospel Messiah,” each Martin Luther King Jr. Day weekend at the Auditorium Theatre. With the Auditorium celebrating its 125th anniversary this season and these being the tenth anniversary Chicago performances of “Too Hot to Handel,” Burke says “this is going to be a very festive celebration this time around.”

“It really started with [conductor] Marin Alsop in New York City with the Concordia Orchestra,” explains Dixon, who became familiar with the piece by being asked to substitute for Thomas Young, the work’s original tenor. “Marin had commissioned it from Bob Christianson and Gary Anderson, to do a whole rearrangement of Handel’s ‘Messiah’ with a modern twist that kept the famous melodies that people have come to love all over the world, except modernizing them in the sense of jazz, gospel, blues and some cinematic orchestration ideas that Bob and Gary were very well known for in New York.”

When performing a traditional Handel’s “Messiah” in Detroit in 2000, Dixon proposed doing “Too Hot to Handel” to conductor Suzanne Mallare Acton. The following Christmas season, Dixon, Burke and Acton gave the first Detroit performance with the Rackham Symphony Choir and have performed it annually at the Detroit Opera House ever since. “When Brett Batterson became the executive director of the Auditorium Theatre, he decided that he wanted to bring the piece to Chicago,” says Burke.

The transposition to the King holiday weekend came about because of “the gluttony of performances that would happen during the Christmas holiday, which is when they had it at Lincoln Center,” says Dixon. “But I always felt—and I said it to Brett Battterson, Suzanne and Alfreda—that the King celebration was the appropriate time, because Chicago as a city didn’t have very much going on around the month of January leading into the Black History Month celebration.

“So, I thought that the jazz-gospel-blues dynamic of the orchestration would lend itself to the celebration of black music in that regard; but the King message also tied into the Handel ‘Messiah’ story about inclusion and all people coming together, good will and peace on Earth. There is a huge civil rights legacy here in the town of Chicago, and those early performances were going on when we had the first African-American president from Chicago, so it’s a very interesting dynamic in that regard.”

Does either Dixon or Burke have a preference for the jazz-gospel version over the Baroque original?

“I love both,” says Burke, unhesitatingly. “I love the traditional ‘Messiah’ and know that Handel was a man of the people. We often like to presume that if he were alive today that he would just be tickled at this work done in this fashion. And it takes quite a bit of technique to do both versions, actually. But if you’re doing the Baroque version of Handel’s ‘Messiah,’ you are going to stay within the confines of the Baroque era and it is going to be a lighter quality and a smaller chamber orchestra, harpsichord, the figured bass by an organist, cellist or string bass. There are embellishments and ornamentation that are certainly permitted but you wouldn’t want to go outside of the period when you do them. With ‘Too Hot to Handel,’ because you are adding other genres, and because we’re now in the twenty-first century, there is even more that you would bring to the table improvisationally. You have more freedom in that sense to spread your wings and fly, without being within the confines of a single era.”

“The beginning piece is written in Chicago blues style,” says Dixon, “yet I have a full orchestra with a jazz band, and before I even get to the first recitative I have three or four high Cs. Therefore, I am not allowed to begin the conversation as if I am a horse and buggy! I have to sing as if I am a tractor trailer. It’s the metal grit and grind of the city. I have to sing more in the grand opera side of my technique just to meet the demands emotionally of a 3,500-seat hall with amplified sound. I have to make the adjustment emotionally, as if I am singing Verdi or Mahler with a seventy-piece orchestra.”

With three vocal soloists, a full orchestra, a jazz ensemble and a chorus of more than a hundred, Burke admits that the audience reaction is vital to the experience. “The audience is part of the show because they are so energetic, it is such an exuberant time for everybody. They dance in the aisles, they sing along, they clap along, they can be very vocal and speak out.” January 17 and 18, Auditorium Theatre, 50 East Congress, (800)982-2787. 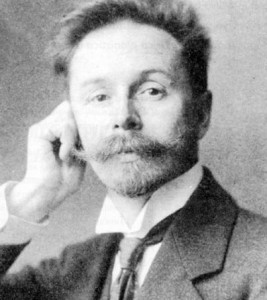 2015 marks the centennial of the death of Russian composer Alexander Scriabin, and Riccardo Muti returns to the Chicago Symphony Orchestra for three programs across January, two of which will mark the start of his Scriabin cycle.

Scriabin’s Symphony No. 1, which features the Chicago Symphony Chorus, and Symphony No. 3 (“The Divine Poem”) will be spotlighted on different programs. Muti will also rehearse excerpts from the Scriabin First Symphony at an open rehearsal with the Civic Orchestra, the training orchestra of the CSO, that is free and open to the public.

Muti has admired Scriabin “for a long, long time,” although says it was his close friendship with legendary Russian pianist Sviatoslav Richter that really introduced him to the full depth of his music. “He is a composer full of the influences of European composers, Wagner and Chopin,” says Muti. “These melodic lines in Scriabin come from the piano music he wrote, and his orchestration so full and chromatic and yet at the same time, transparent. There is also the French influence. After Wagner, it makes him extremely modern.”

Too modern for many, it seems, as a century after his death Scriabin remains largely a neglected master. “Like Mahler, who was not popular for many years but then became popular, Scriabin’s time will come,” assesses Muti. “The score is always very thick. If you are not able to underline the important parts that have to come out to balance the score, the music can seem the same. It needs a lot of work from the conductor and you need a great orchestra, which we have. Mahler, even in the hands of even a not-so-great orchestra can still work; even played badly, it will touch your heart. Mahler always wins even if he’s played badly. Haydn, no. If he’s played badly, he won’t reach your heart. It is the same with Scriabin, and this is what we hope to do.”

Muti recorded the Scriabin symphonies when he was music director of the Philadelphia Orchestra in the eighties and nineties, recordings which are largely considered definitive. “That was many years ago,” Muti admits, “and it will be very interesting to revisit these works and to do them with this orchestra, which has a long history with Scriabin. And in all those years, maybe I’ve improved!” January 15-27, January 26 Civic Orchestra rehearsal (free but tickets required), Orchestra Hall at Symphony Center, 220 South Michigan, (312)294-3000.