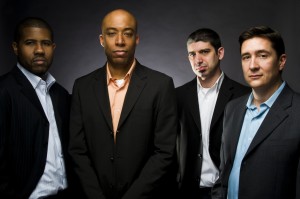 In his imagination’s ear (earmagination?), tenor saxophonist Chris Greene hears this when Brazilian vocalist Ed Motta sings: “He sounds like what would happen if Chick Corea, Antonio Carlos Jobim and Stevie Wonder had a baby, raised him in Brazil, and made him listen to Gamble and Huff records. He’s got this Teddy Pendergrass voice, but he sings in Portuguese. He has these elaborate Chris Cross-Steely Dan arrangements, and he can get super funky, too.”

To honor this musical love child, Greene and his quartet—which includes pianist Damian Espinosa, bassist Marc Piane and drummer Steve Corley—recorded Motta’s tune “Papuera” for their independently produced double CD, “Music Appreciation,” their eighth album in ten years. The title is a reference to a sound bite from the seventies sitcom ‘What’s Happening!!,’ in which Raj, the lead character, tutors an athlete.

The clip opens the album’s second disc, and interspersed between the other thirteen tracks—seven band originals alongside standards by John Coltrane, Wayne Shorter and Charles Mingus—are additional audio bites from such films as “The Untouchables” and “Ragtime,” as well as interview excerpts from Bruce Lee and Branford Marsalis.

“It’s my job,” the Evanston-based Greene says, “to take these elements of music, life, movies and my sense of humor, and put them together in some weird way that is fun for the band to play and, hopefully, interesting for the listener.”

Before Greene’s composition, “Institutional Samba,” begins, a nugget of philosophy from Lee is heard: “To express oneself honestly, not lying to oneself… that, my friend, is very hard to do. And you have to train. You have to train your reflexes so that when you want it… it’s there!” This bit of wisdom (from a twenty-fifth-anniversary DVD of “Enter the Dragon”) is valuable, Greene believes, for artists seeking to stay humble and committed, no matter what obstacles or honors they may encounter.

“If you can play honestly, in the moment, and just be truthful with yourself, that’s very rewarding. It’s not going to do me or the audience any good if I play a bunch of technical stuff that only the few musicians in the audience get. It’s my job to communicate effectively with the audience.”

Making music in the moment—as opposed to making music fit the moment—is the group’s goal. Another insight into Greene’s thoughts about playing comes through a clip from “The Untouchables”: “Don’t wait for it to happen. Just watch what does happen.”

“I’m on stage with three of my best friends, and we all have each other’s backs,” says Greene, who played in a Dave Matthews cover band before starting the quartet. “When we step onto the stage, there’s nothing to worry about, because we’re going to do our best to make each other look good.”

Staying intact as a working ensemble for a decade has involved more than making great music. Persistent promotion matters. To amplify this point, Greene includes this quote from Will Smith. “You might have more talent than me; you might be smarter… and sexier than me. But if we get on the treadmill together… you’re getting off first, or I’m gonna die!”

“You do have to work to be a good musician, but you also have to get your ass out to the clubs, pass out your information, and interact with people paying hard-earned money to see you,” Greene says. “I may not be the best saxophone player in town, but you won’t find anyone who works harder.”

This mindset, Espinosa claims, is ingrained in the ensemble.

“I love playing with these guys. They’re in it for the right reasons. We make music that’s bigger than the sum of its parts.”