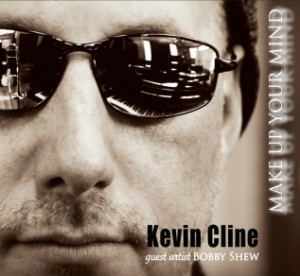 On his debut recording as a bandleader, the Chicago-based pianist and trombonist showcases his versatility and stylistic dexterity on a CD that includes straight-ahead, Latin, contemporary, big band and light jazz. He is in the company of an impressive array of musicians, including Bobby Shew (trumpet and flugelhorn), Dave Hiltebrand (bass) and Paul Zimmerman (vocals). Though the music goes in various directions, it gives us an idea of where Cline has been over his long career as a sideman (he has played with R&B legends like Aretha Franklin and The Temptations, as well as led various bands while working for the Norwegian Cruise Lines).

The disc opens with “After The Rain,” a light jazz-tinged number that showcases saxophonist Jim Gailloreto. He leads most of the tune, while Cline, Bill Harrison (bass) and Phil Gratteau (drums) form a tight rhythm section. “Umbrella, Sunglasses and Gloves” is more of a club number featuring Zimmerman, who delivers the lyrics with great conviction even though the words are a bit silly. “Beware The Snake” has more of an Afro-Cuban feel, with clever rhythmical breaks and great improvisational moments from Gailloreto and the bandleader. The sole cover is an uptempo, funk-tinged take on “My Funny Valentine” with a beautiful vocal delivery by Isha Maria Lewis, who takes the song away from the more traditionally mellow renditions by the likes of Frank Sinatra and Sarah Vaughan, and makes it her own.

There are a handful of duds. “Shirley Not Forgotten” almost brings to mind the theme song for “Cheers,” while “Mistletoe, Me and You” never really catches fire. However, the strength of the other tracks—especially the bebop-influenced “A Shot of J & V”—keeps the listener interested. (Ernest Barteldes)