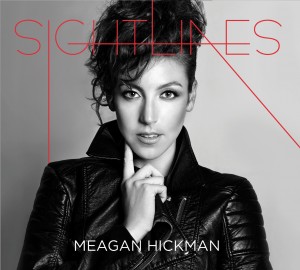 Louis CK has said that this is the age of the artist-entrepreneur, and he might have said it about Meagan Hickman. An incredibly driven Chicago singer-songwriter, Hickman partially funded her second album, “Sightlines,” through an Indiegogo campaign, and is now supporting it with highly polished behind-the-scenes videos on her YouTube channel. Fortunately, her artistic energy is equally supercharged; “Sightlines” is an explosion of talent, its eleven tunes ranging stylistically from a straight-ahead rock anthem (the fantastic opener, “Seize the Day”) to sweetly twangy country-pop (“Not That Girl”); there’s even an R&B ballad (“Time Moves On”) that Aretha could’ve recorded (and what the hell, might yet). The effect can be a little overwhelming; in one of her videos, Hickman talks about processing all the various genres and influences: “I threw around a lot of elements, both classic and current, and in the end came out with me.” Well, girl, that’s a lotta you. Her press materials reflect this, noting that she’s drawn comparison to artists as disparate as India Arie and Bonnie Raitt. I personally picked up a definite Laura Nyro vibe on “Please Stay,” my favorite tune on the album.

Fortunately, everything else about her is rock-solid. She’s a natural songwriter; she probably sneezes in hooks. And her voice is highly distinctive and beautifully supple; it’s got the power, and it’s got the purr. She’s definitely an artist to watch. And “Sightlines” is a record to listen to. True, it lacks the cohesion that makes an album great; but as an indication of the various selves Hickman is sorting through, it’s pretty exciting. She may not have zeroed in on exactly who she is yet, but damn if she hasn’t got some choices. (Robert Rodi)

“Sightlines” is available through the usual channels and on Meagan Hickman’s website.