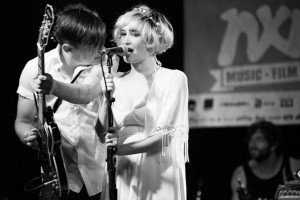 It’s an interesting time of year for live music in Chicago; it’s right before the spring and summer concert season, so many of us are preoccupied with summer-festival-lineup announcements or buying tickets for recently announced shows taking place in the upcoming months. At the same time, it’s smack dab in the middle of the worst part of winter, so many of us are suffering from major cabin fever and eager to leave the house for anything remotely interesting. Chicago’s musicians and venues often approach this time of year in novel and creative ways.

The 2015 Dunn Dunn Fest returns to Chicago February 19-21. In an indie-rock-heavy festival scene, Dunn Dunn Fest has traditionally stood out from the crowd by focusing more on American, folk and roots acts. Six venues will host this year’s event, including The Hideout (1354 West Wabansia), Subterranean (2011 West North) and Beat Kitchen (2100 West Belmont). While Dunn Dunn Fest started in 2013 as an intimate festival focused primarily on Americana, a closer look at the lineup this year reveals a much larger and more diverse list of forty-plus bands that don’t fall so neatly into that category. On February 19, Toronto alt-rock band July Talk plays Subterranean (8pm, $10) and on February 20 sunny indie-poppers Save the Clocktower play the Hideout ($10, 10pm). For more information on the full lineup, venues, times and ticket prices go to the Harmonica Dunn website.

If you’re looking for an event that’s rock-focused but doesn’t require earplugs, check out the reading/performance event at Old Town School of Folk Music (4544 North Lincoln) featuring venerated author/music journalist/critic Greil Marcus. The event is inspired by and structured around Marcus’ latest book, “The History of Rock and Roll in Ten Songs,” which explores the multiple meanings of iconic songs by pairing their original recordings with later covers (i.e. the Phil Spector-produced “To Know Him Is To Love Him,” later covered by Amy Winehouse). Marcus is joined by local alt-country favorites Jon Langford and Sally Timms, who will perform their own interpretations of rock ‘n’ roll classics. The reading takes place on February 19 at 8pm. Tickets are $12 for the public and $10 for Old Town School members.

Speaking of unusual venue/lineup combinations, on February 20 Garfield Park Conservatory (300 North Central Park), in conjunction with creative studio Land and Sea Department, continues its Audial LSD concert series, where live performances are recorded and later released as a seven-inch limited-edition release for attendees. This time, the concert series will host an evening headlined by Montreal’s Suuns and beloved local art rockers Disappears (the show also doubles as an album release kickoff), and supported by Bitchin’ Bajas and minimalist percussive two-piece ensemble Mouth Captain. The performance is staged throughout the conservatory, but it’s all indoors, so you won’t need to worry about layering. The show starts at 7pm and tickets are $23 for the performance alone, $30 for the performance and a recording.

One of my favorite annual winter live-music happenings of the past five years, Empty Bottle’s synth chili cook-off (where electronic musicians face off with both chili and musical interpretations of said chili) will sadly have passed by the time this article goes to press. No worries, because last year Empty Bottle (1035 North Western) started a brand new winter tradition, a winter block party/music fest called Music Frozen Dancing. (Yes, it’s actually outside, hence the name.) I actually didn’t go last year; I planned on it, but winter 2014 broke my spirits in all sorts of ways, and the best I could manage was following the live Tweets and Instagram posts of the event from the warm comfort of my couch. This year, the event takes place on Saturday February 28, and if the comparatively mild weather of winter 2015 continues, I imagine this year will even be bigger than the stunningly large attendance of last year’s event. (Seriously, it was super cold that day.) This year’s lineup is taking a decidedly loud direction with Perfect Pussy, Protomartyr, Chicago noisemakers Oozing Wound and indie rockers Ne-hi. It’s a great, hard-rocking roster, but if that’s not your personal speed, check out the after-party with the Windy City Soul Club at 9pm.