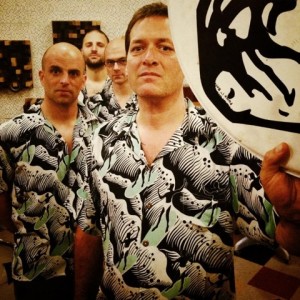 Jimi Hendrix once famously said,”You’ll never hear surf music again,” presumably meaning that his brand of blisteringly complex guitar-god rock would put an end to twangy California valentines forever. You have to wonder what he would’ve made of the mongrel genius of the twenty-first century, and of the nascent genre known as dark surf. If that’s a new term to you, all the more reason to check out the collaboration by garage-punk guru John Reis and the Minneapolis trio The Blind Shake, who are coming to town to support their new album, “Modern Surf Classics.” This is dense, muscular, high-velocity stuff, with multiple guitars crashing through rolling, nasal-inflected hooks—like the surf music you grew up with, after washing down steroids with a twelve-pack of Red Bull. The material wears its influences both nakedly and wittily; the brief spoken-word intro to “Beach Leech” recalls the similar lead-in to The Surfaris’ 1963 hit “Wipeout,” replacing the older tune’s maniacal cackle with an agonized groan. Yet there’s also depth and shade to this music; the album’s first single, “Brown Room,” has a haunting, arms-length air of foreboding; and even a hard-driving, ride-the-goddamn-waves-already number like “Kooks On the Face” goes all ominous and widescreen at the bridge. The band’s not afraid of dissonance or atonality; in fact this is that rare brand of party music that bears listening to long after the party’s over. But don’t cheat yourself; hit the party first. Also on the bill: Brokeback, The Bingers and DJ Tall Pat. (Robert Rodi)