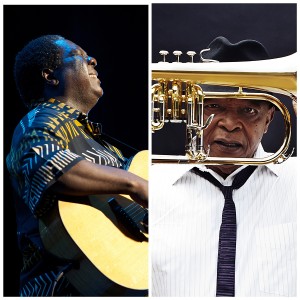 The long battle against the apartheid regime in South Africa, which culminated in Nelson Mandela’s election as president in 1994, was fought by the country’s musicians as well. Hugh Masekela and Vusi Mahlasela were two of the greatest; they helped give the movement its voice at a time when most of the world ignored the plight of the country’s blacks.

Masekela, whose career spans more than five decades, is known for his versatility as a flugelhornist and singer. Early in his career he worked primarily with jazz ensembles, but he also did a lot of session work with pop artists like The Byrds, and later toured with Paul Simon in support of his seminal album, “Graceland.” He is also the composer of “Bring Him Back Home (Nelson Mandela),” which became the anthem for the movement calling for the release of the imprisoned activist.

Vusi Mahlasela’s music is both raw and accomplished. A self-taught musician, he writes songs that blend elements of African music with reggae, pop and soul. He sings with a passion that has earned him the nickname, “The Voice.” His tunes often speak of peace and reconciliation—themes that embody Mandela’s own quest to bring the country together without recourse to revenge as apartheid came to an end.

The two iconic musicians are backed by a five-piece band. Though they’ve collaborated in the past, this is the first time they have embarked on a joint tour, which they’ve entitled “20 Years of Freedom.” It’s an experience not to be missed. (Ernest Barteldes)