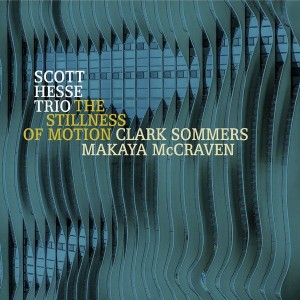 “The Stillness of Motion” opens with a guitar laying down a groove while a bassist takes the melody line. This is the reverse of how it’s usually done, and it’s a testament to Scott Hesse’s generosity and sense of ensemble. He’s one of Chicago’s most highly regarded guitarists, and yet in the first measures of his new record he gives the spotlight to a fellow player. Not that Clark Sommers, the player in question, requires charity; when Hesse steps back into the forefront, Sommers has no trouble maintaining his share of the musical dialogue. Ditto drummer Makaya McCraven, who manages to establish an intriguing voice of his own throughout the proceedings, especially on “Yardbird Sketch,” where he provides a percussive landscape as broad as a lawn, over which Hesse wanders searchingly, occasionally somersaulting into dreamily descending chords.

The record’s ten cuts vary widely in tone and texture, comprising a program that’s both adventurous and yet strangely hushed; there’s a raptness to the proceedings that bears out Hesse’s assertion, in the liner notes, that “The music on this recording is fluid, yet still.” Despite the shimmering spareness, there’s plenty of sly inventiveness on offer—as in “Unit ‘e’,” a meditative piece that occasionally swerves into bossa nova playfulness.

But my favorite cuts are those named after the trio’s musical heroes. “Laws of Motian,” a tribute to the late jazz drummer Paul Motian, finds McCraven’s drumming is at its most appealingly delicate, like the fluttering of a bird’s wings—and a cheekily unhurried bird at that, not in any great rush to get where it’s going. Then there’s “Ravel,” a beautifully constructed ballad with a plangent theme spread over a spacious arrangement, accentuated by gorgeously dissonant chords; it begins by evoking a hazy 2am on the dance floor, then abruptly slips into a march-tempo, “Bolero”-like middle section. And “Hendrix” is a rousing closer, with a driving beat, a sinewy bass line, and some searingly prodigious soloing from Hesse. The masters—all of them—would approve. (Robert Rodi)

“The Stillness of Motion” is available through the usual channels and through Origin Record’s website.