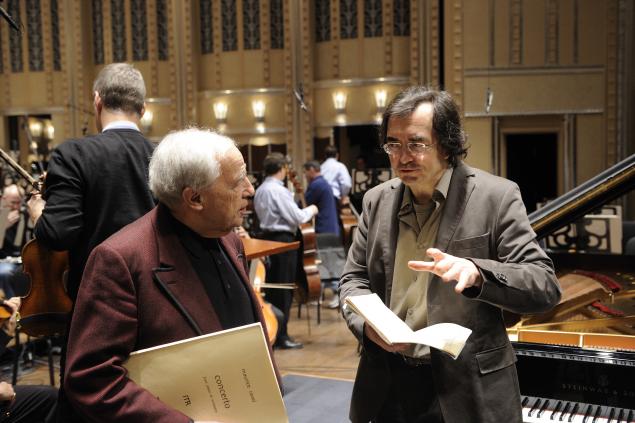 When French pianist Pierre-Laurent Aimard came to Chicago in 1986, it was as a member of Pierre Boulez’s l’Ensemble InterContemporain for a week of performances. At that time, Aimard had already been playing with the Ensemble since its inception a decade earlier.

“It was such an exciting time,” Aimard recalls. “Boulez had been active abroad and was living in Germany but the moment he came back to France, there was so much anticipation.” Boulez did not disappoint: he founded the Paris-based IRCAM, the Institute for Research and Coordination in Acoustics and Music, with the goal of enlarging the domain of materials used for music. That goal was embraced by musicians of all genres and even brought Frank Zappa to Boulez.

When Boulez himself asked Aimard to join IRCAM’s new resident ensemble, “it was a privilege, and I thought I would be there for a couple of years.” He would remain for eighteen years, before finally setting off to have a career of his own in 1994. “I was overwhelmed by the power of his artistry, of his musicianship, his fabulous intellect, his work ethic and the commitment that he gave to all of the pieces he was serving. It was a happy eighteen years.”

In celebration of Boulez’s ninetieth birthday on March 26, Aimard and Yugoslavian-born pianist Tamara Stefanovich—who was a student of Aimard’s seventeen years ago and now has a career in her own right—will present a recital of the complete piano works of Boulez, music that Aimard has lived with most of his life. “I began working on the Second Sonata when I was twelve to thirteen years old,” says Aimard. “I tried to analyze it, I was fascinated. In his early years, Boulez was a pianist and his most important early works are all piano pieces. When he became a conductor, his most important pieces became orchestral pieces.”

The piano pieces, Aimard feels, show Boulez emerging as the most important musical voice after the Second World War. “The world was being reconstructed and composers were looking for new expressions. There is such richness in this music, always new depths and meaning. We will perform the pieces chronologically and talk a little about their significance.” The recital will close with Aimard and Stefanovich performing Boulez’s monumental 1961 composition, “Structures II,” for two pianos together. March 15, 3pm, Orchestra Hall, 220 South Michigan, (312)294-3000. 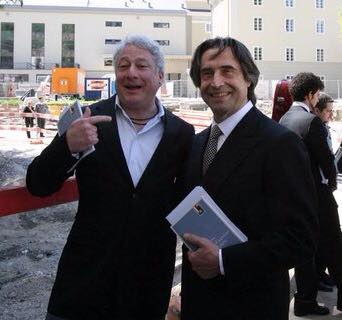 Much has been written about the sudden death of arts critic and broadcaster Andrew Patner, but Chicago Symphony Orchestra music director Riccardo Muti uniquely honored his memory by co-dedicating his recent, extraordinarily moving performances of the Mozart “Requiem” to Patner. There will also be a public memorial service at Orchestra Hall on March 18. If these gestures seem unprecedented, so was the friendship that Muti and Patner shared.

“I wanted to do this because for me, the loss of Andrew has been something very painful,” Muti explains. “He was one of the very few persons in this city with whom I could exchange ideas and have a conversation full of humor and have a good laugh, but also speak seriously about art, about society, about philosophy, about theology. This is becoming very rare in the world.

“When I was a young boy, there was no television in Italy so on Saturday or Sunday afternoons, we would speak with our teachers who were in the park or outside the school. With Andrew, we had this possibility and I wanted to hear his ideas—not necessarily to agree with them, but they were always profound. So, the dedication was not just an act.

“I lost a brother as well this year. When I go back to the village where I grew up, still now, I go back to the cemetery because I like to see all of the inscriptions on the graves. One that always impressed me was where a father wrote on the grave of his son who died very young, ‘It is not life that is going to die, it is death that is going to die.’ It’s very profound. It means that our life here, our physical life is the real inferno. The father was telling his son, ‘You are leaving the inferno here and going back.’

“In Italy, especially as Southern Italians, we grew up with a sense of death, and when I conduct a ‘Requiem,’ I try to convey this concept of this very tight relationship between the living and the dead. When we do this music, it is like the entire world of our friends and our relatives who are dead are together with us.” March 18, 7pm, Orchestra Hall, 220 South Michigan, (312)294-3000.