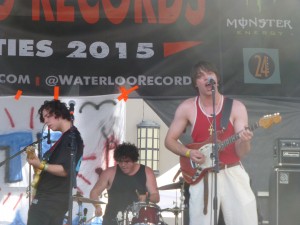 “To hell with poverty,” Gang of Four tells us, “we’ll get drunk on cheap wine.” The only problem is that the band is playing at SXSW on a stage sponsored by dozens of global megabrands and funded by tens of thousands of trade show attendees, each of whom has shelled out thousands of dollars to attend. But just like the song, SXSW has an irresistible beat you can dance to, so that art, entertainment and fun ultimately trump commerce.

Connecting the dots in Austin is increasingly difficult, as venues have expanded geographically. East Austin and Rainey Street keep exploding, and the notorious main part of 6th Street is becoming less and less relevant. It’s hard to decide whether to race all over town or adopt a stay-in-place strategy and let the music come to you.

Even if you plan, serendipity still works. It’s exciting to hear music coming out a window or door, then running in to hear what’s going on. This year great, chiming guitars bashing their way out of Hotel Vegas lure me in to hear Kay Odyssey, a strong girl-guitar band from Austin which is about to put out its first album. Once I’m inside, Hotel Vegas proves ideal for a stay-in-place strategy; it has four separate stages plus a great showcase and party curator; it’s also next to other good east-side venues like Gypsy Lounge.

The right showcase sponsor can help you find new music in a sea of unfamiliar names. Chicago’s Flower Booking and Windish Agency put on solid showcases and day parties. Smaller specialty publications, record companies or record stores also provide good points of reference. She Shreds magazine, for example, clues you into great girl-guitar bands and hosts several showcases, including a party at someone’s mom’s house out in northeast Austin—you really had to be careful not to stand on the vegetables!

So what about the bands? Here’s a partial rundown of those I encounter, beginning with a few Chicago natives—and including a few that are heading our way.

The Lemons (Beerland)
These happy-go-lucky troubadours combine the hootenanny boy/girl harmonies of Greenwich Village folk heroes like Peter, Paul and Mary and The Washington Squares, with singsong pop rhythms and simple lyrics like Jonathan Richman’s. The merger makes for sweet sonic nuggets. A half-minute song bite about a trip to the ice cream shop catches one sunshine-smiley moment so well that the band plays it again.

Twin Peaks (Waterloo Records)
Don’t mistake them for a David Lynch-loving group of brooders. After playing together since high school, these fuzz-tone hard-garage rockers are more Black Lips than black high-heels, creating chaotic energy in every performance. Drummer Connor Brodner has an it’s-me-versus-the-drums explosive intensity, while the rolling stoner riffs keep flowing from the guitars.

Metz (Mohawk, outdoor)
A furious, intense and relentless punk (but not hardcore) group from Toronto. If you have angst to get rid of, this is your band.

The Zombies (Stubb’s BBQ)
Rod Argent and Colin Blunstone both turn seventy this June, and have been a team for more than half a century. Argent pulled off two of the best keyboard solos I’ve seen in a long time, making “Time of the Season” and “She’s Not There” groovy again.

Best Coast (Palm Door)
Though I still prefer Bleached, Bethany Cosentino’s sun-drenched L.A. songs win me over with a live three-guitar army driving them on. Her new work appears to have more of a psychedelic feel.

Gang of Four (Radio Day Stage, Austin Convention Center)
They’re down to one original member, and the new material is a little bit New Romantic for my taste; but Andy Gill is still one of the greatest and most stoic post-punk guitarists, and the songs are still jagged, bass-laden dance numbers with staccato rifle bursts and searing guitar courtesy of Mr. Gill.

Despite the big money and brands on hand, every band reviewed above could be seen for free, without a badge or wristband. This is what keeps me coming back again after again for this annual death march of music. See you there next year?