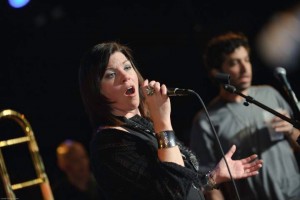 It makes perfect sense to book a band into a theater—at least when the band is Booty Movement Coalition (affectionately known by aficionados as BMC) and the theater is the Mission at the new iO (formerly the ImprovOlympic). If you expand the concept of improv beyond stand-up and sketch comedy to encompass all the live arts, you end up with a much wider performance palette; and that appears to be the Mission’s mission, as they’ve committed to an ongoing series of music Mondays. BMC, for its part, has the distinction of being a ten-to-fourteen-member band which since its founding in 2009 has never given the same performance twice—because every single note is improvised, on the spot. This can make for some wildly exciting evenings (check out the lightning-in-a-bottle that is their YouTube page), but it’s also made them a hard sell in a pigeonholed marketplace. Last I checked, they described their music as “funkhousejazzworldhiphop,” and for all I know they’ve tacked on a few syllables since. These guys don’t just defy classification, they nuke it out of existence. That said, all it takes is one set to win you over. It’s riveting to watch these players apply their tremendous virtuosity to whatever groove happens to blow their skirts up on any given night; and the nearly telepathic communication between them guarantees they work that groove like a goddamn pinball machine. Typhanie Monique, the jazz siren who founded the outfit, is the lead vocalist, and at full cry her wail can shear through sheet metal. The beat-boxer JQ, whose percussion you can feel in your tailbone, works the other mic till it basically melts in his hands. The rest of the ridiculously wicked ensemble includes Kevin Brunson and Clyde Davis on drums; Chuck Webb and Tim Seisser on bass; Dave Saenger on guitar; Rick Gehrenbeck on keys; Marques Carroll on trumpet; and Raphael Crawford on trombone. (Robert Rodi)