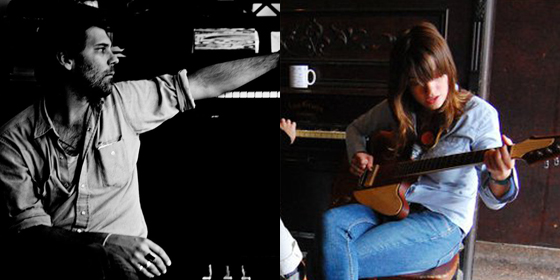 It’s hard to believe we’re already four months into 2015. It’s particularly unbelievable that—at least to me—it’s so far been a pretty uneventful year for indie music, local or otherwise. Of course the weather’s been in a pretty soul-killing state until very recently, which has made going out for live music a bit more of a chore, but there’s also been something of a demo drought in my neck of the woods. There’s plenty of time to catch up, and Chicago tends to be at its best in spring and summer, so it’s my hope that the next few months will make up for a rather barren winter of music news and events.

That’s not to say that there’s not some good live music to check out in the next few weeks. I mentioned the Gapers Block-sponsored “Stars Align” series several columns ago; it features two musicians from different local bands collaborating for a one-night-only live performance. This month’s show, on April 16, promises to be a special one, because instead of performing covers or each other’s tunes, singer-songwriters Cameron McGill and Angela Mullenhour (of the band Coins) will perform newly co-written original songs at GMan Tavern (3740 North Clark). The show’s free, as usual for the series, and starts at 7:30pm.

It’s a bit weird to talk about book events in a music column, but there are two coming up at The Empty Bottle (1035 North Western) that are pretty punk rock, in their own way. First off, the bar’s free monthly book club returns on April 18 at 4:30pm, with a discussion of the excellent memoir “Girl In a Band” by Sonic Youth’s Kim Gordon. It’s a relatively quick read that nonetheless packs in a lot of memories and emotions. Even if you’re not into Sonic Youth, it’s worth checking out for its evocative look at the music industry, marriage and building a life and identity as an artist—especially a woman artist—in male-dominated spaces.

If you’re more interested in buying books than chatting about them with strangers, you can drop by the Bottle the very next day at noon for Curbside Splendor’s book fair, which features a plethora of indie/D.I.Y. publishers selling their literary wares. Admission is $8, and there will be a bar.

We’re still waiting to hear the official lineup for Riot Fest 2015. If the past few years have been any indication, it will be the most crowd-pleasing roster of the Chicago summer festivals, with a combination of nostalgia punk and alt-rock acts, plus a smattering of underground attractions. (I’m willing to bet actual money we’ll see Faith No More and Refused headline this year, considering that both of these reunited nineties faves are playing this May under the Riot Fest banner.) In related news, Riot Fest has announced the May 1 lineup for its recently launched Showcase series (in partnership with Double Door, 1551 North Damen) and it’s a packed, decidedly mandolin-focused bill: Brendan Kelly (best known from Lawrence Arms) headlines, rounded out by Sam Russo, the stripped-down folk punk of 6’10 ( featuring Tobin Bawinkel of Flatfoot 56), Last False Hope—another band heavy on the fiddle and mandolin, and the acoustic-punk sounds of Sincere Engineer (a.k.a. Deanna Belos). If punk or acoustic isn’t your thing, don’t be discouraged; it appears Riot Fest Showcase is aiming for some musical diversity in its programming, and if April’s headliner (local emcee Showyousuck) is any indication, succeeding showcases are likely to go in a different direction. What will remain consistent is Riot Fest’s commitment to highlighting local talent; it will be exciting to see the direction of the showcase over the coming months.

Record Store Day returns on April 18. It can be a divisive occasion for music fans. While it’s the most wonderful day of the year for some collectors—who will cheerfully wake up at the crack of dawn to stand in line for the chance to grab a vinyl reissue of an album they already own—for others it’s an empty, commerce-driven push by major labels to use indie record stores as pawns to cash in on the resurgent vinyl craze, with pointless limited-edition pressings from bands that no longer get airplay. Despite my cynicism of the day itself, I am all for the idea of supporting your local record stores all year long, and if RSD gets bodies through the door and buying a few records, I approve. As of this writing, there’s no news of in-store performances at the usual RSD mainstays like Laurie’s Planet of Sound (4639 North Lincoln) or Reckless Records (26 East Madison, 3126 North Broadway and 1532 North Milwaukee), but be sure to check out RSD’s website for updates.