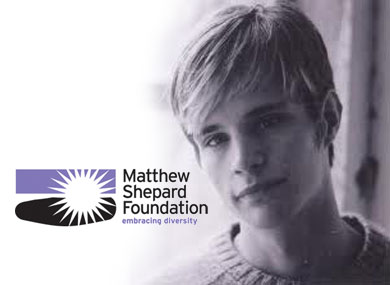 In the sixteen years since his death at the hands of homophobes, Matthew Shepard has become the face of gay martyrdom, and his image—forever young, forever tousle-headed, forever tragic—has permeated gay culture. But that image’s power is redoubled by the almost equally iconic efforts of his mother, Judy Shepard, who turned grief into activism and established a foundation in her son’s name, dedicated to eradicating hate crimes. It’s Judy’s influence that has resulted in the unlikely event taking place on May 3: a benefit featuring an impressive lineup of Chicago musicians, the majority of whom are heterosexual and almost all of whom specialize in jazz—not a genre often associated with gay causes. It came about due to the efforts of jazz singer Elaine Dame, who had provided her services to other benefit gigs (for post-tsunami Japan and Chicago Women’s Health Center, among others), before performing at a Shepard Foundation event, where she had the chance to meet Judy Shepard. Dame found her “quietly courageous; she has presence. She’s very short, but somehow she’s monumental.” Dame was inspired to do something for the cause, “using what I have: time, and a little bit of talent”—not to mention the friendship of almost every jazz cat in town, and a weekly residency at Southport & Irving. The resultant event features two house bands (one in the restaurant, one in the bar) with more than forty topflight players and singers sharing the stage and mic throughout the night. There’ll also be raffle prizes (including CDs by many of the event’s participants) and craft cocktails created for the occasion. Scheduled performers include Hinda Hoffman, Shawn Maxwell, Art Davis, Tommy Muellner, Stacy McMichael, Aylon Samouha, Rose Colella, Mike Allemana, Chris Greene, Lindy Endres, Christy Bennett, Scott Hesse, Jeannie Tanner, Damian Espinosa, Jenifer French, Peter Lerner, Marc Piane, Sabina, Ty Cooper, Russ Phillips, KT McCammond, John Eskola, Chris Bernhardt, Alyssa Allgood, Mark Colby, John Sutton, Amy Cole, Terry Bartolotta, Johnny Bash, Eric Schneider, Arlene Bardelle, Dan Chase, Shara Maxwell, Suzi Petri, Rob Block, Casey Nielsen, Tim McNamara, Joel Kelsey, Jeremy Kahn, Pat Christenson, Edith Castro and Marinia DeFrisco. Additions up to the benefit date are almost a certainty. (Robert Rodi)