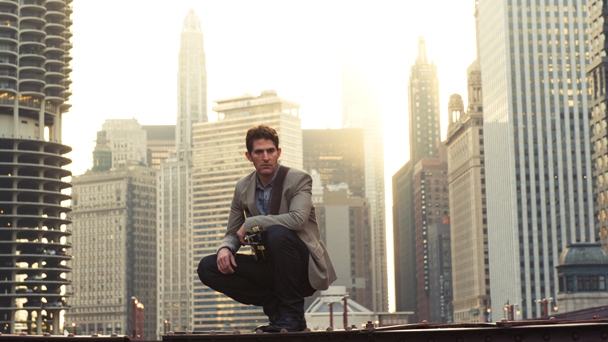 Chicago singer-songwriter Joe Goodkin is perhaps best known as the founder of the local indie band Paper Arrows. But his career took an interesting turn when he wrote a thirty-minute adaptation of “The Odyssey” for voice and guitar, which he ended up touring around the country to widespread acclaim. I’ve only heard excerpts, but there’s an aching plangency in the work that seems to give it a direct connection to the Bronze Age texts. Now Goodkin has emerged on the other side with a new EP, “Record of Life,” that comes across almost as an adaptation of his own earlier work—or more accurately, a commentary on it; a corrective of where it didn’t go far enough—as if all that time spent with Homer has given him the cojones to call bullshit on his previous, more timid self. The record’s opening cut, “Dog and Cat,” for instance, is a fairly unambiguous reappraisal of the Paper Arrows tune, “Tell the Kids.” Goodkin sings, “Like my song about divorce, it isn’t really about kids / It’s about our dog and cat and how we split them up / Maybe that doesn’t matter much, and maybe I shouldn’t bring it up / And there’s regret again just when I thought I’d won.” In the same tune he even admits the failure of nerve in his younger lyrics: “Did I hide behind a ghost / Did I stop instead of go / Was I too goddamn afraid to risk it all? / Well I’ve got another chance and I’ll say it so you know / It’s on me and me alone to rise and fall.” Elsewhere he confesses how in his youth he’d “take it right up to the edge and pull the punch.” Not every tune is quite so nakedly honest, but it’s still heady stuff for a performer to bring onstage, and it’ll be interesting to see how he handles the vulnerability that comes with it when he brings it to Schubas this month. But since it’s the CD-release gig, we can at least presume the bulk of the audience will be staunch fans, ready and willing to take the journey with him. They’ll find it worth their while… as will you. Also on the bill: Steven Gilpin. (Robert Rodi)