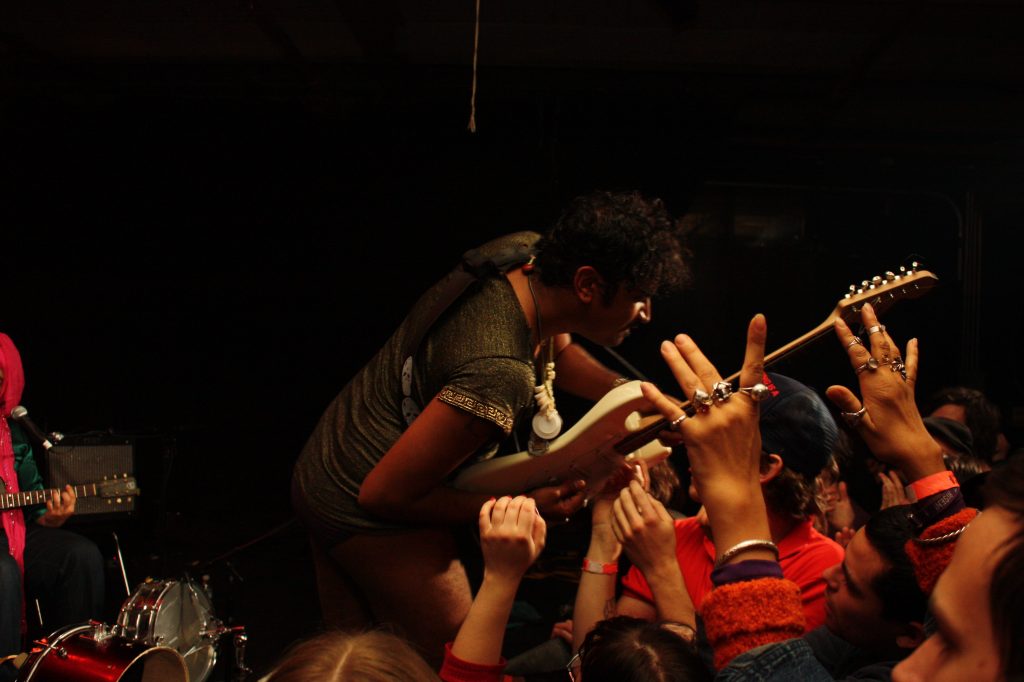 To be fair, none of the parties involved ever actually declared that rock was dead. Yet that sentiment was the takeaway for many earlier this year when The Magic Stick, an iconic Detroit rock club, announced it was switching formats to electronic dance music.

The club—part of a historic entertainment complex that includes The Majestic Theatre and the city’s oldest continuously operating bowling alley, The Garden Bowl—enjoyed its peak as the epicenter of the “garage rock” boom of the early 2000s. Homegrown acts like the White Stripes, the Von Bondies, the Detroit Cobras and the Dirtbombs helped make stripped-down, guitar-based music cool again, resonating with audiences in Detroit and beyond.

For a time, bills stuffed with four or more bands were common, with the second-floor venue’s wooden floors flexing somewhat alarmingly under the weight of up to nearly 600 sweating fans. Hip national acts like Yeah Yeah Yeahs, Sleater-Kinney and Arcade Fire would make stops at the venue in the following years. The White Stripes, by then selling out theaters and stadiums across the world, even considered the venue as the location for an “Elephant”-era secret show, before those plans were thwarted by Jack White breaking his hand in a car accident.

The Magic Stick, however, seemed to fall out of favor as quickly as it exploded into popularity. By the second decade of the millennium, dwindling audiences made the small room seem empty and cavernous; management attempted to psychologically remedy the problem by partitioning the room in half with a curtain.

But it wasn’t that audiences weren’t listening to rock music anymore. As owner Dave Zainea explained when announcing the format change in a January 9 article in The Detroit News, rock ‘n’ roll wasn’t dead, but “the rock and roll market is saturated, it’s time to change.”

Indeed, the post-garage era saw a proliferation of smaller, rock-oriented clubs open in and around Detroit. In 2007, Paul “PJ” Ryder bought The Lager House. In the nearby city of Pontiac, The Crofoot Ballroom and its smaller Pike Room opened in 2008. Later came Trinosophes, a coffee house with a specialty for booking out-there musical acts, and The Loving Touch, a pool hall in the adjacent suburb of Ferndale that has hosted many popular national acts. Last year, the UFO Factory opened near The Lager House, and HopCat—a trendy craft-beer chain that boasts 130 taps—debuted its live music venue, The Huma Room, across the street from the Majestic Theatre complex.

“There’s so many other venues now. The whole market got divided,” says Virginia Benson, who did booking at The Magic Stick for a year before starting her own production company, Party Store Productions. Part of what led to the Stick’s demise, she says, is a lopsidedness in the capacities of clubs in Detroit: Many of the aforementioned venues have 250-person capacities, a fraction of the Magic Stick’s. Nothing in town really hits the sweet spot between the two. In other words, when faced with the choice of selling out a smaller room or playing to a nearly empty Magic Stick, many bands apparently made the ego-boosting decision.

The Magic Stick’s format change wasn’t just limited to a new musical palette. The club got a new name (the retrofuturistic “Populux”) and a $300,000 makeover, which featured the addition of more bars, a more expansive use of the space, and—most notably—psychedelic, color-changing LED-lit pillars that clearly pander to the raver set. The rebranding was unveiled in April.

But it’s not as if guitars have since been banned outright from the room. In June, a show by British punk vets Wire was relocated to the club at the eleventh hour, when sluggish ticket sales indicated they wouldn’t fill the adjacent Majestic. In May, electronica outfit Toro y Moi performed a guitar-driven set with a multi-instrumental backing band.

Chalk it up to the increasing cross-pollination of genres. “Electronic dance music can be a lot of things, when you get into cold wave, minimal synth, and a lot of that stuff,” Benson says. “I feel like there’s always going to be rock shows at the ‘Magic Stick,’ no matter what anybody says.”

Benson adds that the club’s numbers problem could have had less to do with the popularity of musical genres and more to do with the current technological habits of young people. When she started hanging out in Detroit’s music scene in the early 2000s, “We couldn’t find good music unless we went out to shows to see the music. You would go out to see anything, because you didn’t know what it was going to be.”

And it wasn’t just music that drew them to clubs. “You used to have to go to shows to meet people and to get laid,” she says. “Now you can do it on the Internet.”