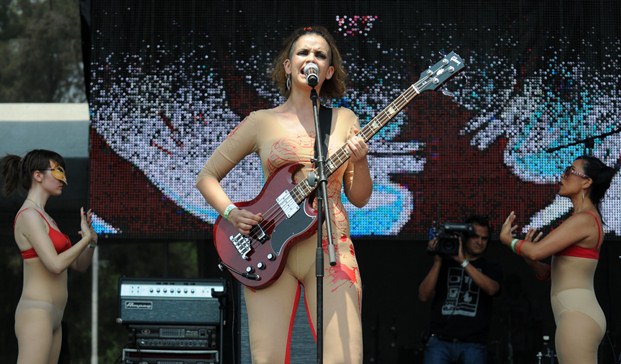 Since the launch of her first acting role in the very visceral 2011 Mexican independent film, “El lenguaje de los machetes” (Machete Language), which also featured one of her poppier—though still altogether subversive— tracks, “Mi Muñequita Sintética” (My Synthetic Doll), we haven’t heard too much from the reigning queen of Mexican indie, Jessy Bulbo. If you know anything about Mexican indie punk music then you’re quite familiar with her often quaint vocals and more furious Riot Grrrl leanings. Her albums range from bassy rockabilly and roaring noise to her more recent experiments with electronic and hip-hop, and in fact her versatility and importance in the Mexican indie world are unmatched by any other artist. (Though if you’re a girl-power fiend you’ll probably want to catch her dancier, candy-coated electro successor, María Daniela y su Sonido Lasser, or even the more indie-pop stylings of Natalia Clavier, both on Sunday). However overshadowed by the heavy-hitter mainstream appeal of internationally renowned acts at Ruido Fest this year, Bulbo’s performance on Saturday is a fair bet to outshine any and all of the testosterone-heavy acts on the roster. True, some of her tracks, like “Maldito,” serve as anthems for boys and girls who often choose to love terrible guys; but angst appeal aside, Bulbo’s talent and sweeping command of multiple genres, her devotion to independent production, her authenticity and often unmarketable experimentation make her my favorite genre-bending vocalist, guitarist and performer. Jessy Bulbo is the only artist I know who can jump from garage rock to rancheros with punk poise and grimy grace. (Jose Luis Benavides)