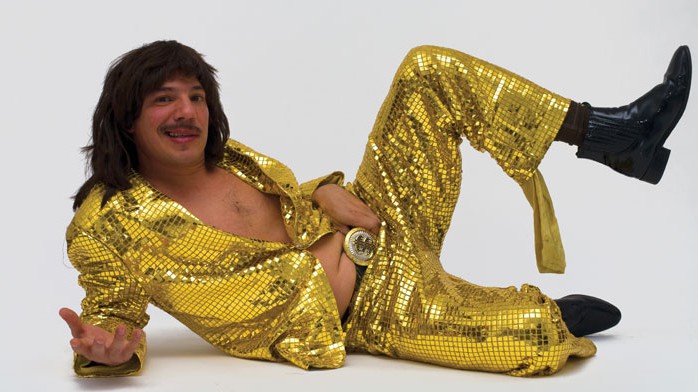 There’s no concise way to describe the electro antics of Julian Lede, better known as the madcap Mexican artist Silverio. His self-proclaimed simple samples and often cajoling approach to electro dance might seem light years ahead to some fans, just plain odd and off-putting to other, more austere and prissy electro goers. Known for his rampant energy, notorious red bikini, glistening beer belly and sweat-drenched performances, Silverio mixes humor, dissonance and the crassest elements of Mexican popular culture into his music, as well as his persona. That said, I’ll be the furry, short, ambiguously ethnic bald dude (parental advisory) stripping and rubbing my junk up against the photo pit barrier at this year’s first Ruido Fest (July 10-12), an all-Latin American alt-indie music festival in Pilsen. For the more faint of heart, or those looking for something more stereotypical sounding (á la the more palatable, down-tempo hip-hop infused electro riffs of the far tamer Mexican Dubwiser, also playing Ruido July 11), I recommend you steer clear of Silverio’s set. If you like your electronica fast and hard, Silverio’s guttural, high-octane approach might soil your pristine cowboy boots. Warning: you’re bound to get a bloody nose moshing with this madman, so pack some Kleenex. Lede is well known by the LatAm nerds, but few have probably actually seen him this side of the border. It’s hard to get Mexican acts visas for gigs in the States, let alone the more irreverent indie OGs like this guy, so if you’re wise you’ll be first in line to catch this no-holds-barred performance by the one and only “His Imperial Majesty,” Silverio. (Jose Luis Benavides)