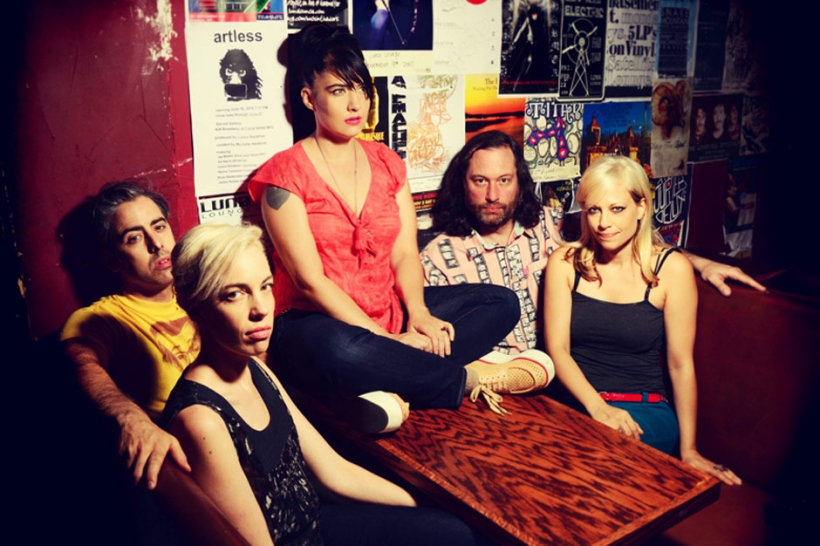 Music can be fun, danceable and meaningful; this is what The Julie Ruin teaches us. Originally formed as a solo project by Kathleen Hanna, the founder of the riot grrrl movement, The Julie Ruin combines pulsing disco, electro-clash and punk to provide the most danceable band you may find at Pitchfork, or anywhere else, this year—and the only one singing songs about gentrification and euthanasia.

Ken Mellman—keyboardist, vocalist and former member of the Obie-award winning drag cabaret duo Kiki and Herb—took time from recording The Julie Ruin’s second album to let us know a little bit about this veteran, artistic and activistic band, and why you should get to Pitchfork early on Sunday.

Tell me about The Julie Ruin.
Kathleen wanted to start a new band, so she systematically tricked each of us into joining her. She snagged her old bandmate from Bikini Kill, Kathi [Wilcox, bassist], who was just moving to New York from D.C., Sara Landeau [guitarist and proprietor of the Brooklyn Music Studio for Women and Girls], who she met when they both were volunteering for Girls Rock Camp, and Carmine Covelli [drummer], who had been Le Tigre’s tour tech guy. Kathleen had been a fan of my old act and we had been friends for years.

On your most recent album, “Run Fast,” your influences range from Motown to X-Ray Spex. How do you cover that wide a spectrum?
As we were getting to know each other as a band and talking about favorite songs and styles, we realized that we all have pretty far-flung influences, so I think it just naturally happened. And it was fun for us to, say, make an Archies-eque song and then ask ourselves “How can we make this sound more like our band in 2015?”

How do you collaborate as songwriters?
One of us will bring in a chord progression or a loop or a small idea, and we’ll try to expand on it. Then Kathleen will start working on vocal ideas and that will help us figure out a chorus or a pre-chorus or bridge, and then we will all start adding parts. So I think the songs come together with all of our individual styles mixed together. A favorite part of the process has been when Kathleen brings in finalized lyric sheets and we’re like, “Oh, that’s what this song is about?”

The song I wrote the lyrics for on the first record, “South Coast Plaza,” was about a friend of mine who had made a pact with his friend to kill him if he ever got sick enough. I sent that to Kathleen and she was like, “Ha. So that’s the third song on this album about euthanasia.” (laughs)

Can music today be both fun and politically relevant?
I think in various ways we are all activist artists, so I think it just naturally flows into our music. But then we don’t want to be an “issues” band, and mostly we want things to be fun and danceable.

Do you think it’s important to get people to dance?
It’s always super fun to look out and see people dancing at shows. And we also laugh a bit, because most of our songs are about pretty heavy topics like illness, death and gentrification.

Speaking of gentrification, you live/record in Greenpoint, Brooklyn which seems to have lost some of its creative edge and indie cred with the proliferation of big clubs, venues and bars.
I sometimes think the whole world has lost some of its edge. I was at the last shows at 285 Kent and Glasslands, and it was sad to see these vital venues close in Williamsburg. But I do think it’s a cyclical thing—new places have already opened, and if they can’t be in what are now fancy neighborhoods, well that wasn’t where they were meant to be in the first place. We had a song on our first album called “Kids in NY,” which was about how because it is so expensive to live in New York, the only way to stay there is to just get more hardcore.

Do you think the Supreme Court decision on same-sex marriage has impacted your views on the future of our society or what role music may play in the future?
I think we all are slightly less pessimistic about this country’s future. I think in some ways it is still revolutionary to be an out musician and I hope that it becomes a non-issue.

What thing could each and every one of us do to make the world a better place to live?
Eat less meat, collect rainwater and don’t judge other people. Oh, and use eco-totes when shopping.

If you were going to let any politician use one of your songs as a theme song, what politician and song would it be?
If Stephen Colbert runs for anything he can use all of our songs.

Which other Pitchfork bands do you want to see?
I mean, this lineup is pretty stellar. Waxahatchee, Chvrches, The New Pornographers, Sleater-Kinney, Perfume Genius… we love so many of these bands!

You have kind of an early spot on Sunday. What would you say to someone who is going to the festival to see Chance the Rapper or Run the Jewels, to convince them to check you out?
We recently played Primavera Sound in Barcelona the same day as Run the Jewels, and while we were watching them a lot of people came up and said how much they loved our set, so I think their fans could find something to like in our band!