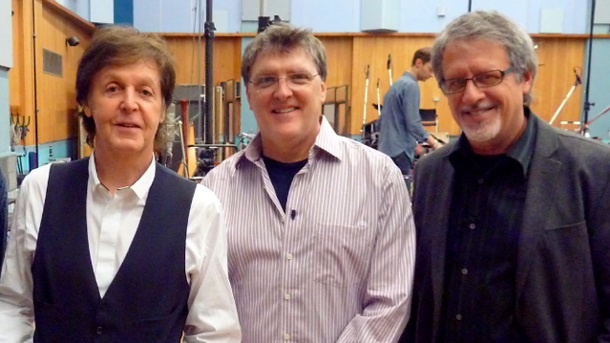 Martin O’Donnell and Michael Salvatori have been friends back to their college days in the 1970s when they were in rival bands in the western suburbs. “We’ve always been very competitive with one another,” Salvatori recalls. “Marty came in to record five songs with his band, so of course, I had to write better songs and record those as well.”

While Salvatori was working for his father’s printing company, O’Donnell was painting houses to put himself through music school. “They were shooting a television commercial and Marty was painting the set. The director found out that he was a composer and offered him five hundred dollars if he would write some music for it. I had just taken out a loan for a basement recording studio setup and Marty called up and said, ‘If you let me record there, I’ll split everything with you fifty-fifty.’ We put ourselves out there on a handshake and collaborated on the commercial as O’Donnell-Salvatori, like Lennon-McCartney. It has been that way ever since.”

In addition to operating a successful recording studio together in their early years which Salvatori still runs downtown, the two became known for co-composing and performing catchy jingles for radio and television before creating the music for the then-Chicago-based Bungie company and its introduction of the hugely popular “Halo” video game series.

“Right about the time we were shipping ‘Halo 3: ODST,’ Paul [McCartney] and Ringo [Starr] were on stage at Electronic Entertainment Exposition, pushing the new edition of the Beatles’ Rock Band,” O’Donnell recalls. “We were on stage, and Paul and Ringo were on stage. We weren’t onstage at the same time, but it was the same stage at the same Microsoft press conference. A broker friend of ours had this idea that based on Paul McCartney’s history of always doing new things, he might be interested in composing new music for a new game in the works, that became ‘Destiny.’ I’m like, ‘Yeah, sure, knock yourself out,’ never expecting anything to come of it.”

Two years later, a planned twenty-minute meeting with McCartney in Los Angeles “became two hours,” says O’Donnell. “It was surreal. I went through all of the stuff I thought I needed to get through… and then he started to ask questions and we started talking about all sorts of other things. When he was getting up to leave, I got up to shake his hand one more time, he came over and gave me this giant hug. Okay, twenty minutes is now two hours, and a hug: this is like a good first date. 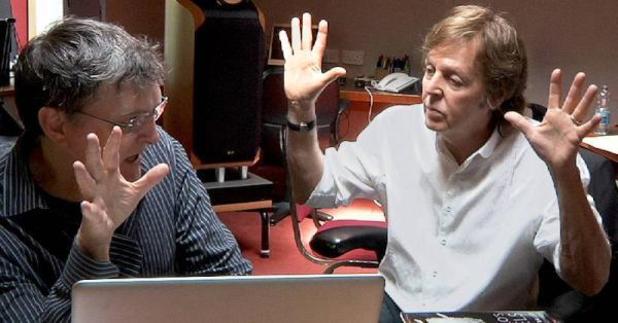 “Within the next few weeks, I got a call from him and he was really excited and wanted to start working and wanted to know what he could start doing. Over the next two years we collaborated and met at several different studios, including Abbey Road in London and Capitol Records in Hollywood. Given the history of those studios with the Beatles, it was amazing. One of our meetings was backstage at Wrigley Field when he played there. I even got to touch the ‘Yesterday’ guitar.”

Salvatori notes that despite McCartney’s iconic status, “he has a way of putting you at ease that we were all equals on this project. It was quite disarming and you would quickly forget who he was.” O’Donnell agrees: “It was surprising that he really wanted to collaborate. I thought he would want to do his own stuff and we would use it as is, but he made it clear early on that he loved the way we would take melodies of his and combine them with stuff of ours and make it ‘our’ music. Just as Mike and I had learned so many years ago—ironically, emulating Lennon-McCartney—a true collaboration becomes far more than the sum of its parts. A true collaboration becomes something magical.”

Even the new McCartney song “Hope For the Future,” which is used for the end credits of “Destiny,” became a collaboration. McCartney, who appears as a hologram in the music video, has released the song as a single and has been playing it out on tour. “I hope he plays it at Lollapalooza,” says Salvatori. “When he sent the demo back, it was the biggest thrill of the process.”

When “Hope” was recorded in New York, Salvatori recalls that on a break, he asked McCartney how to play a particular guitar lick in the song that he was having trouble with. “He sat down right in front of me knee to knee. He’s a leftie, so it’s like looking in the mirror and he showed me how to play the lick. Of course, it was super easy, and my first reaction was that was way easier than I was making it. ‘Oh yeah, most of my stuff is. Most people are surprised when they see how easy it is to play my things.’

“He showed me some other things and when the break was over I said, ‘Thanks for the guitar lesson.’ ‘Well, that will be twenty dollars.’ I didn’t have any money at the time so I told him, ‘I’ll catch you when we’re in Abbey Road, when we’re in London.’ Fast forward weeks later, he walks into Abbey Road and he’s like a king there. There was a hundred-and-six-piece orchestra sitting there and they’re on break. I was up in the control room and he sees me and calls up in front of everyone, ‘Hey Mike: do you have my twenty dollars?’ ”