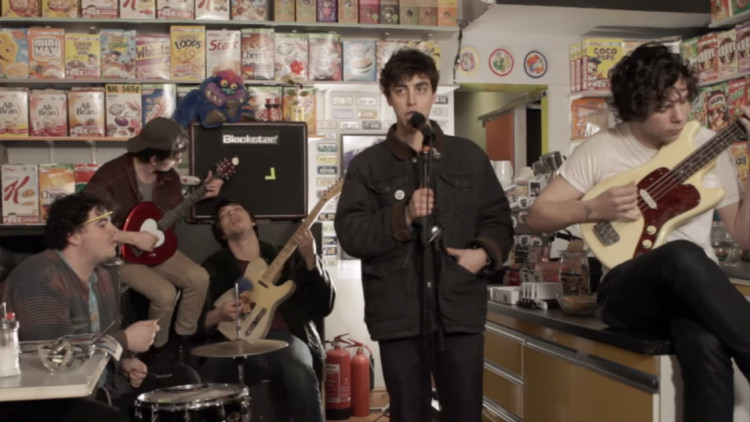 Do you like it big? Big crowds, big sounds, big sensations? Lollapalooza, as it is wont to do, brings on every kind of big this summer. The annual festival is an excuse to indulge everything oversized, everything bloated (in the best sense) about the music world of now. Dive nose-first into the communal affair, and hold my hand if all the noisy fun and sweat start to scare you.

4:30pm-5:30pm
Hot Chip
Bud Light
There is something ridiculously urgent about this band. The British synth-poppers make dancing seem like the most important thing in the world, with their slow-burn beats and the haunting lilt of singer Alexis Taylor. And who’s to say dancing isn’t so essential?

5:30pm- 6:30pm
The War on Drugs
Palladia
It’s hard to find more finely-tuned rock schmaltz than what TWOD is churning out these days. Their chug of Americana and pretty tones was built to chain-smoke in front of when done live—if you’re into that sort of thing.

5:45pm- 6:45pm
Alabama Shakes
Samsung Galaxy
It’s a crime that the festival makes you choose between The War and The Shakes. Felonious. This is like choosing between… arms. They’re two of Lolla’s most irresistible acts, and you’d be remiss not to make time for both. I suggest a slightly different schedule for these shows, seeing TWOD until 6:10 and then transitioning to Alabama Shakes.

7:45pm-10:00pm
Paul McCartney
Samsung Galaxy
If Paul played two hours of the na-na-na at the end of “Hey Jude,” it would be great. If he recited the alphabet over and over, that would also be worth your time. You hardly need me to tell you not to skip such a legend’s set.

9:00pm-10:00pm
Flying Lotus
Pepsi
Mr. Lotus is the as-yet unrecognized genius of his generation. A brilliant composer who could awe more of the musical world if he chose to, he continues to double down on strange, daring albums that only dedicated listeners find the gold in. Be smart and join the club.

2:15pm-3:00pm
Travi$ Scott
Perry’s
One of today’s more powerful purveyors of whooshing, booming hip-hop replete with auto-tune balladry, Scott’s musical DNA puts him at the heart of what’s taken over the radio. Get the pure, untainted version of a trend that won’t stop.

3:45pm-4:45pm
Toro Y Moi
Palladia
Chaz Bundick is as chill as they come. Sit back deep into the lawn and allow the warmth of his keyboard tones and the smooth funk of his rhythms to melt you into the earth.

4:45pm-5:45pm
The Tallest Man On Earth
Bud Light
TTMOE has become a bit too sentimental a songwriter and composer in his recent efforts, but he’s still a virtuosic performer who can make thousands of hearts shake with no more than a guitar and a yell.

5:45pm-6:45pm
Tyler, The Creator
Palladia
Tyler is an outrageous young man. The debate about how much he’s in on his own joke can go on ad infinitum. But on this Saturday evening, all that matters is that it will be making everybody around either very nonplussed or very stoked, and you should be there for the strange spectacle.

8:00pm-10:00pm
Metallica
Samsung Galaxy
Whether or not you care for their world, Metallica are the undisputed gods of it. All other metal bands since have struggled not to evoke this famous pack of greasy, long-haired, stud-and-leather-wearing dudes with a proclivity for killing your eardrums. You know you want it.

1:30pm-2:30pm
Twin Peaks
Sprint
Chicago’s finest torch-bearers of a strain of garage rock that’s distinct to this city. Their set alone will justify the day’s price of admission, for some.

5:40pm-6:20pm
Bully
BMI
Lead songstress Alicia Bognanno will make you feel like you found your old cassette player and also the best cassette you never knew existed. Her songs inspire halcyon memories of the nineties, but it’s the conviction of her performance that lifts the music above well-done period pieces and drives Bully’s work into your heart.

6:45pm-7:45pm
A$AP Rocky
Bud Light
A$AP is a brash rapper with a seemingly unbecoming flair for ethereal, experimental backing beats. But he somehow makes his love for pussy, money and weed jibe with the sensibility of a quiet stoner kid with his shoelaces tied together.

7:30pm-8:30pm
TV on the Radio
Sprint
Get home early tonight, and do it by ending with a band whose style remains hard to describe after more than a decade. Dance, but cry too, and sit still and think. Be in America, but don’t skip Africa or Europe or Asia either. Just know that it’s all somehow rock ‘n’ roll, with TV On The Radio.