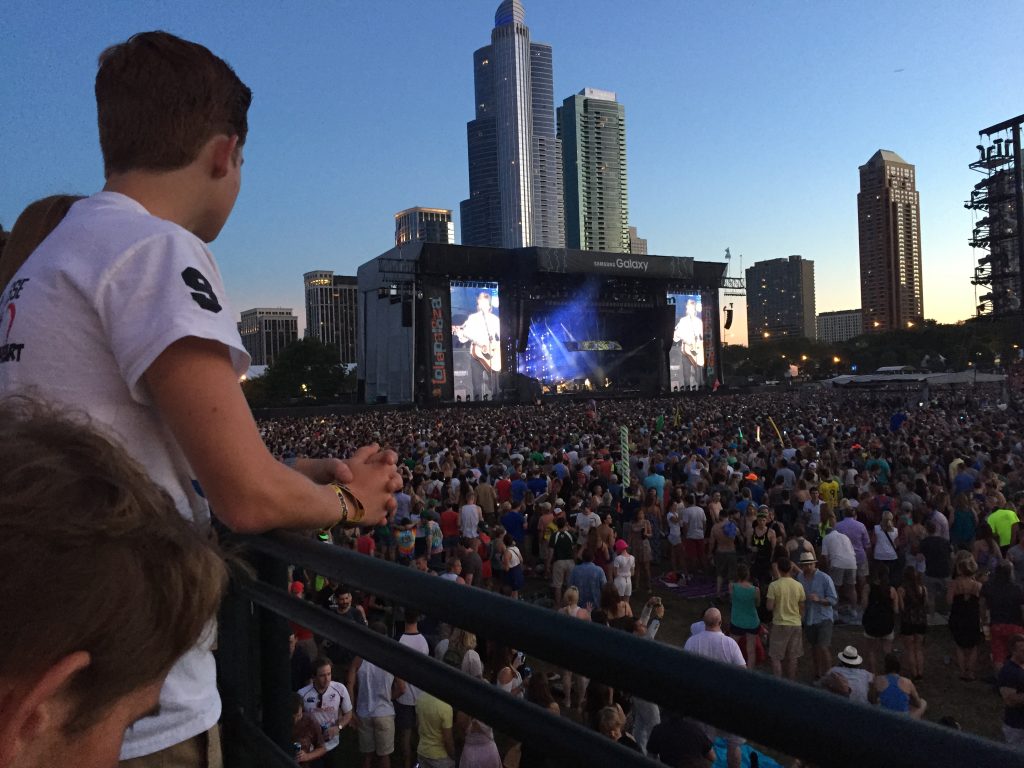 Paul McCartney’s singing voice may not be as strong as it once was, but he hasn’t faltered in terms of one of his key talents, showmanship, and that was in evidence Friday night at Lollapalooza. That, backed with his songwriting partnership with John Lennon in a little band from back in the day called The Beatles, has cemented Sir Paul as that hoariest of rock and roll clichés, “living legend.” Given his position in The Beatles, his role as the leader of Wings and his substantial output as a solo artist, McCartney has a considerable song library from which to borrow and he did so tonight, including a few choice surprises.

He began the evening by inviting the large, enthusiastic crowd along with him on a “Magical Mystery Tour” and included other predictable Beatles numbers like “Lady Madonna” (accompanied by a slide show of inspirational female figures), “Let It Be,” “Hey Jude” and during his encore, the early classic, “Can’t Buy Me Love.” As the dragonflies danced through the air and the full moon appeared on the horizon, it was also no surprise to hear a rousing, sing-a-long rendition of “Ob-La-Di, Ob-La-Da” and a convulsive performance of “Back In The U.S.S.R.,” accompanied by a few quick stories of meeting Soviet military bigwigs, since he and his band were the first rock ‘n’ roll act allowed to play Red Square.

McCartney’s set also included predictable Wings classics like the “futuristic” “Nineteen-hundred and Eighty-Five,” the sprawling “Band On The Run” and the James Bond theme song “Live And Let Die,” which featured all kinds of spy movie visuals like flames and actual fireworks. But the highlights came in the form of the unexpected choices, like doing his acoustic “I’ve Just Seen A Face” from the Fab Four’s “Rubber Soul,” John Lennon’s “Being For The Benefit Of Mr. Kite!” from “Sgt. Pepper’s Lonely Hearts Club Band” and dedicating “Blackbird” to oppressed citizens of the United States.

The most touching moments of the evening were when he dedicated “Here Today” from his 1982 solo record “Tug of War” to Lennon (not a surprise, since it was written in his remembrance), and asking the crowd if they knew that the other deceased Beatle, George Harrison, was a great ukulele player before beginning Harrison’s “Something” on the ukulele. McCartney traded in the uke for his trademark Hofner bass, but his band’s guitarist ably performed the guitar parts as the song swelled to a climax, with slides of Harrison being shown in the background. Both were emotional moments for sure, only slightly marred by the thumping beats of the electronic dance music coming from the next stage over, Perry’s.

McCartney joked a few times that he and his band were going to have to work out disco arrangements to some of the evening’s songs to be able to be heard and fit in well with the rhythms he was hearing. He was a good sport about the situation, but some of the hardcore Paul fans were very displeased with the sound bleed, a perennial issue in festival environments like Lollapalooza.

His solo “Maybe I’m Amazed” was a lovely tribute to his late wife, Linda, while the Wings numbers “Let Me Roll It” and “Hi Hi Hi” seemed to have already provided inspiration for many in the crowd. On the downside of the trip, “Helter Skelter,” another Lennon composition, was ably accented by a dazzling light show and video effects, but the highlight of the evening was McCartney performing a duet with Brittany Howard from Alabama Shakes during “Get Back.” Howard had the opportunity to show off her considerable vocal and guitar chops in what was clearly a highly improvised performance, but the whole show achieved another amp of voltage with her contribution.

It’s also not a surprise that Paul McCartney ended the evening with the medley that concluded “Abbey Road,” but it was done in such a lovely, passionate way that it was easy to forgive the old cheeseball, and he certainly put a ton of energy into the performance, so much so that it’s hard to believe he’s seventy-three.

The other highlight of Lollapalooza day one was the opportunity to see the Swedish sisters that are First Aid Kit, and they brought along a few surprises as well. Initially it was surprising to hear how much their band rocked, given that the pair are known for delicate, acoustic songs and close harmonies. But even though the Söderberg sisters may have been voted least likely to perform a Black Sabbath cover at Lollapalooza when they were in high school (which would have been five to seven years ago), that didn’t stop them from throwing on a frenzied version of “War Pigs.” Could it be that the Swedish waters have infected them not just with the folk and twee traditions, but also the legacy of Swedish death metal too? Now that would be a dynamite collaboration. After the abrupt left turn of “War Pigs,” First Aid Kit ended their set with their instant classic single, “Emmylou” from their second album, “The Lion’s Roar.” Emmylou Harris, Gram Parsons and Johnny Cash are referenced in the song, and although those references, along with the subject matter of the title cut to their new one, “Stay Gold,” inspired by a Robert Frost poem, are seemingly at odds with their tender young ages, so is their formidable talent.