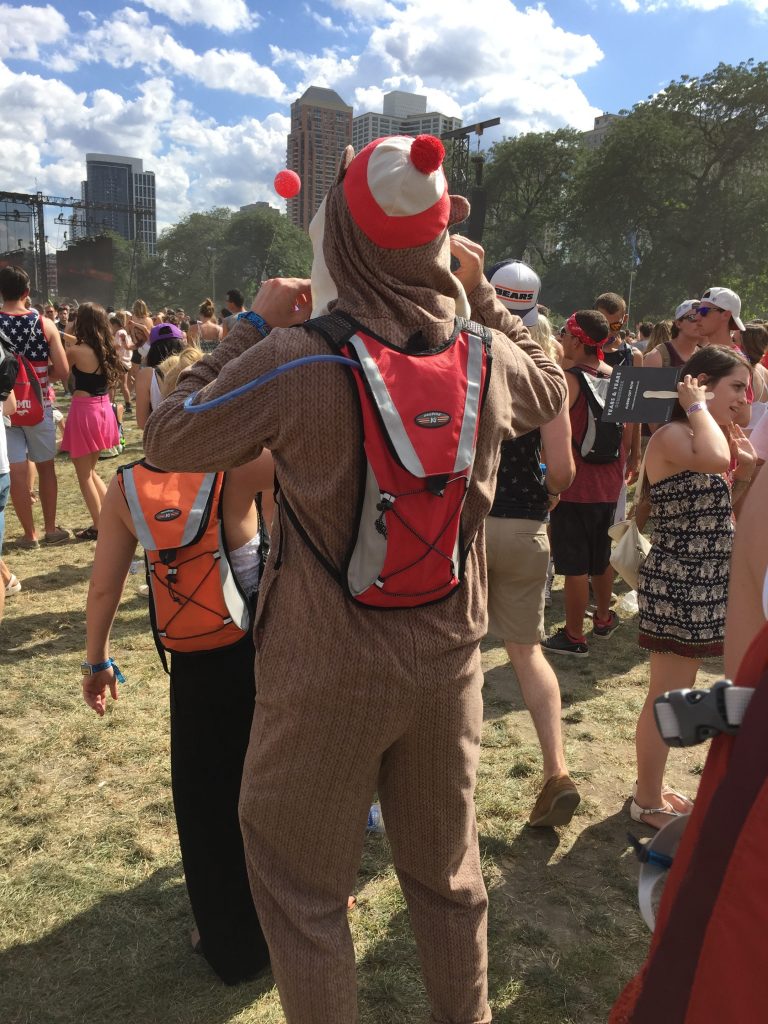 Festivalgoers receive their tickets and passes with the caveat that the shows will go on “rain or shine.” But there’s always the caveat that if high winds and lightning pop up on the radar, all bets are off, and attendees of Lollapalooza Day 3 had to wrestle with the forces of Mother Nature, not once, but twice.

Sunday started hot and humid, and skies were sunny as Australian trio DMA’s treated those in attendance at the Pepsi stage to their jangly, echoey guitar pop. DMA’s are clearly inspired by the mid-nineties Britpop tradition, à la Oasis, Blur, Happy Mondays, etc., who themselves were born of NME C86 influences like The Mighty Lemon Drops, The Shop Assistants and The Wedding Present. Whether this was apparent to the crowds enjoying their set at the Pepsi stage was unclear—they may have been there based on the strength of the band’s “Laced” single, which has garnered some airplay on local AOR radio station WXRT, was a song of the week for KEXP and garnered a review in Entertainment Weekly last fall.

Whatever their rationale for attendance, the fans—and those passersby who got sucked in—were treated to a solid set of guitar-driven pop, with hooks in abundance. Although a trio, there seemed to be six or seven of them on the stage, and with their trading off on lead vocals, it became difficult to tell who was who. The most moving moment of their set was when the frontman sang on “Sailing,” “I never sussed you out, you never shut me down, but when the sun comes out and the sun goes down I’m stuck inside of you, you’re stuck inside of me.” Those soaring, sprawling melodies were likely stuck inside many Lollapalooza attendees for the rest of the day.

Juilliard-trained composer Alex Seaver and house DJ Logan Light are the electronic dance duo Mako, and the highlight of their generally average EDM set at Perry’s was being joined onstage by pop singer Madison Beer (a Justin Bieber discovery via YouTube). Her strong soprano and stage presence on the breakout single “I Won’t Let You Walk Away” provided the saving grace to what was otherwise a sort of by-the-numbers dance music set.

Born Sir Robert Bryson Hall II in Gaithersburg, Maryland, rapper Logic (and his DJ, Rhetoric, naturally) provided a real hip-hop highlight of the weekend on the Perry’s stage. He name-checked local rock club Reggies as his first sold-out show, and deserves mad props for his nimble delivery, especially his rapid-fire enunciation of his obscenity-laden raps—he might give Chicago’s Twista a run for his money in terms of sheer speed. He asked the crowd to remember that he stands for one thing: “peace, love and positivity”—despite the “logical” contradiction that might be inherent in that claim. Logic also exposes some interesting biases in hip-hop; he was signed to Def Jam and his debut album was executive produced by No I.D., who initially expressed some hesitation over what to do with another “white rapper.” From a distance, Logic might look white, but he’s actually African-American; still, for him, race is irrelevant. He concluded his dynamic and galvanizing set by making the crowd shout, “I’m special!” and there’s no question that Hall is special indeed.

Another Chicago music festival, another weather-related evacuation. Just as Union Park had to be evacuated during Pitchfork in mid-July, a roughly forty-five minute evacuation was prompted by a small but mighty storm that popped up just west of the city and was moving quickly toward Grant Park. Attendees were heard to complain that this “storm” only amounted to a light drizzle, but had they known about its initial strength—which uprooted trees, and caused one death and many injuries at a festival in west suburban Wood Dale when a tent collapsed—they would probably have been more appreciative of the precautions. Thankfully, by the time this particular storm cell made it to Grant Park, it had diminished greatly and had nowhere near the impact of the 2012 monsoon-like rainstorm and evacuation.

As predicted, A$AP Rocky’s set was more distinguished by his guests than his individual rapping talent, and to that end, after performing the first of two Chief Keef numbers, he brought out “a nigga that I fuck with” (which apparently means an associate with whom I work), Chicago’s Vic Mensa. Together the duo put over a rollicking version of Mensa’s “U Mad,” that led into a medley of nineties favorites including House of Pain’s “Jump Around” and “Smells Like Teen Spirit,” which he dedicated to Kurt Cobain and Nirvana. The highlight of his set occurred when A$AP called attention to what he said was the first time he’d ever seen anyone crowd surfing in a wheel chair. He debuted his new single collaboration with Chicago’s Chief Keef (who unfortunately can’t come back to Illinois until he has resolved some legal issues), also included “Hands On The Wheel,” originally performed with Schoolboy Q, and a version of Carnage’s “WDYW,” following the latter’s pounding set at the Perry’s stage the night before. He left the stage with his classic “Fuckin’ Problems,” which may set a new record for use of the word “fuck” and “bitches” in multiple combinations. Well, it’s a classic in terms of blatant misogyny, anyway. Jay-Z had “99 Problems” but a “bitch” wasn’t one; the inverse seems to be true for A$AP Rocky.

Although the promoters of Lollapalooza tried to move the end of the fest back to 10:45pm to make up for the earlier storm evacuation, the threat of another line of storms from the north led them to truncate the headliners’ set times and dismiss the festival just before ten, to the disappointment of fans of Florence + The Machine’s histrionic wailing and Bassnectar’s pounding bass, electronic flywheel squeals and hyperkinetic light show. The San Francisco-based DJ and producer, whose real name is Lorin Ashton, concluded his abbreviated time with a rare live performance of “Pink Elephants” and left the stage with a snippet of The Doors’ “Riders On The Storm,” a nod to the incoming inclement weather. After the show, via his twitter account, Ashton described the experience as “100% raw live panic race against time to beat the lightening [sic]–what a rush.” Dismissing early proved to be a wise choice on the part of the promoters, as another strong line of storms with frequent lightning did indeed hit downtown just after 10:30pm and would have posed a significant threat to concertgoers leaving the grounds of Grant Park.