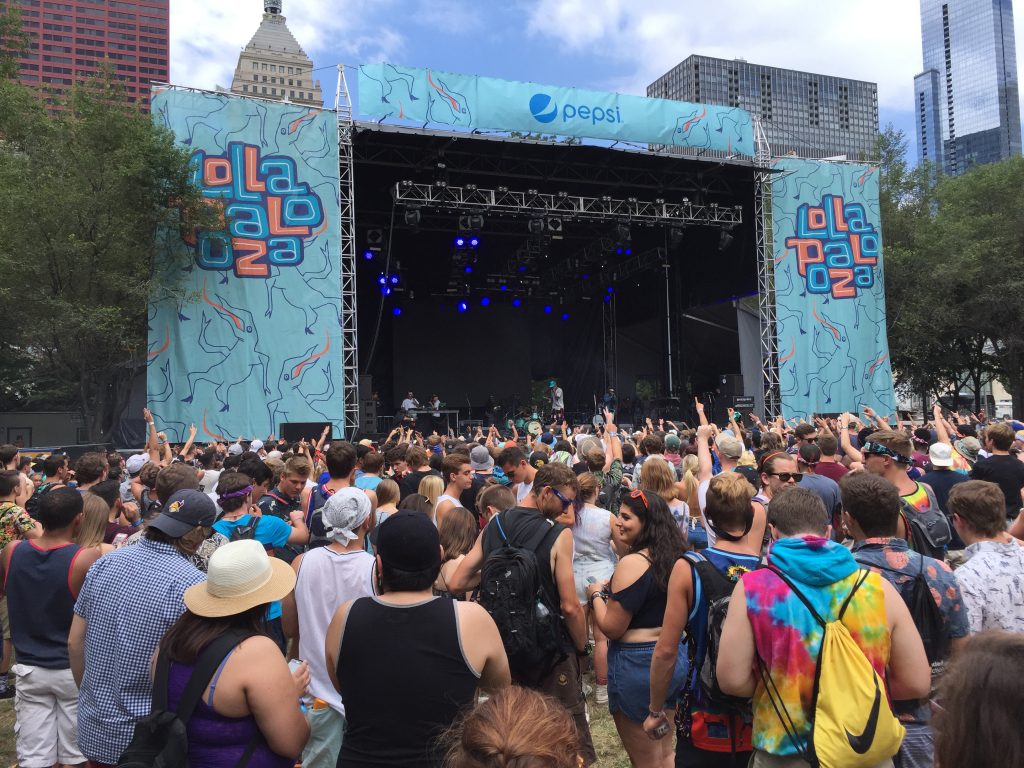 One of the few hip-hop acts on the Lollapalooza bill this year, and the only one from Chicago, Mick Jenkins led the audience in a repeated chant to “drink more water,” dovetailing off the musical project he released last year entitled “The Water[s]”—which he told the rapt crowd (who mostly seemed to know the words) is a metaphor for truth. His verbal flow was just as fluid as water, and to Jenkins’ credit, his four-piece ensemble included a live, jazz-influenced drummer, along with the de rigueur backing man and DJ. But the proof was in the performance—as Jenkins put it at the end of one number, “all of this shit is perception.” Perception being what it is, he concluded his set with a reference to N.W.A.’s “Fuck Tha Police,” a pointed reference to the ongoing national controversies prompted by allegations of police brutality against African-Americans. The point was not lost on anyone. (A few hours later rapper Travis Scott would attempt to make a similar point at the beginning of his set on the Perry’s stage by telling the crowd to climb over the security barriers and rush the stage, shouting “We want rage!” According to published reports, the plug was pulled on his performance only five minutes in, and he was arrested and charged with disorderly conduct.)

Jenkins’ performance on the Pepsi stage was just long enough to overlap with most of the set from Jessica Hernandez and The Deltas, but they concluded their time with a cool cover of Le Tigre’s “Deceptacon.”

Django Django began with a spacey, video-game-sounding intro before segueing into a dreamy, if not wimpy set of songs, the delicate, winsome melodies of which seemed to get lost across the expansive field in front of the Samsung Galaxy stage. A “new” song from the Scottish quartet was introduced with a stellar live drum solo, but quickly resumed the understated groove to which they seem to be accustomed. Some songs brought to mind Duran Duran B-sides, others elicited Nick Drake singing over Atari soundtracks, but neither seemed to engage the majority of the crowd, the lead singer’s frequent entreaties of “Come on, Chicago!” notwithstanding. Crowd members waiting for “that one song” had to hold out until their next-to-last salvo, when they played their breakthrough single, “Default”—and it’s clear live why this song is a winner, propelled as it is by surf-guitar chords. One of the attendees at the Friday after-show at Thalia Hall said their live rock really translated well there, and it’s easy to imagine that the power and the subtlety of their music would come across much better in those environs, as opposed to the same stage that Paul McCartney was barely able to command the night before.

Death From Above 1979 pummeled the crowd with their sludgy bass-based punk-meets-metal approach. The drummer wailed on both the microphone and his set and the bassist expertly played both bass and guitar parts on his electric bass at the same time. Accented by some very dark spoken-word samples, the duo provided some much needed musical daggers to supplant the sunny, sweet pop Band-Aids provided by the likes of Charli XCX, Tove Lo and HOLYCHILD.

New York’s Brand New brought a welcome injection of real punk into the Lollapalooza lineup, and although the band got bogged down in some turgid emo moments here and there, their passion was contagious, and served as a nice palette cleanser—or perhaps scraper would be a better word, judging by the rougher-than-sandpaper vocals of the lead singer.

Metallica may be doomed to traffic in heavy metal clichés, but they made no apologies for their irony-free set. Despite the depressing lyrical content of many of their songs, lead singer James Hetfield claimed that singing these songs makes him “feel good” and he hoped the audience felt the same way.

Unlike McCartney the night before, their full-frontal sonic assault would not be impinged by the neighboring Perry’s dance stage—neither Carnage nor Alesso provided any musical competition. It’s amazing that a mere quartet can craft such a loud yet tight sound, but perhaps that is the point of heavy metal. While many critics argue that Metallica is not an adventurous choice in their thirty-fourth year, they were a solid headliner that without question drew the most hardcore fans of the day (who also easily won the most—and most varieties of—t-shirts of the day). Metallica started by pouring “Fuel” on the fire, a fantastic way to put the proverbial pedal to the metal, and proceeded to speed through fourteen of their early and later “hits” including “For Whom The Bell Tolls,” “Wherever I May Roam,” “The Unforgiven,” “Sad But True,” a laser-laced “One” and an extended workout on “Master Of Puppets,” which was the highlight of the night. There were the obligatory guitar and bass solos, from Kirk Hammett and Robert Trujillo, and drummer Lars Ulrich kept the rockers lurching forward and stopping on a dime when warranted, jumping up from his kit frequently for reasons that weren’t readily apparent. Was he astonished at what just happened, or did his hard-hitting drumming literally propel him from his stool? No amount of laser-focused insights could shed light on his reasoning.

The band seemed to enjoy playing off of the crowd of somebodies or who’s-whos standing at the back of the stage throughout their set, including some folks holding a sign that said “Happy B-day, Papa Het,” so maybe this was the culmination of an actual birthday party in the background. Metallica rounded out their main set with an emotional performance of “Fade To Black” and a rocketing rendition of “Seek and Destroy.”

They returned to the stage with an encore that included two covers, the traditional “Whiskey In The Jar” and Diamond Head’s “Am I Evil,” which were allegedly only significant to hardcore Metallica fans. One show veteran in the crowd, at his eighth Metallica show, didn’t recognize either of them. They closed the night, running fifteen minutes past the ten o’clock curfew, with the dirge-like “Nothing Else Matters” and the obligatory, but rocking “Enter Sandman.” They should have and could have used some pyrotechnics like those McCartney had treated the crowd to the night before; but otherwise it seemed like the perfect Metallica show, especially given that it was relatively short and to the point, given their limited festival time slot. A real Metallica concert would have allowed the foursome to beat their singles and back catalogue to death with lengthier versions, and those might have worn out the welcome to everyone except the most diehard fans.