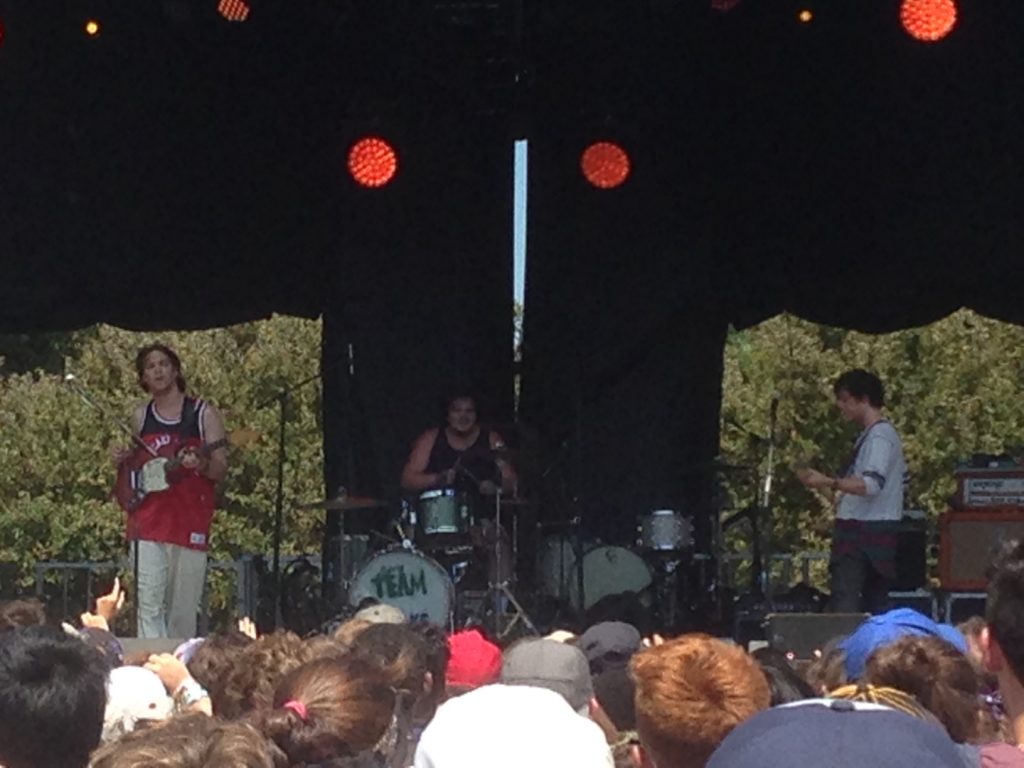 Sunday afternoon I had my first concentrated dose of Twin Peaks. I’m not generally drawn to this kind of act—you reach a certain age, you find your appetite for brash young guitar bands has been satiated almost to the point of aversion—but I love a local success story, and these Chicago natives have had an amazing year since they slashed their way to stardom at Pitchfork last year. Their album “Wild Onion” became both a critical and commercial success, launching them on an extensive national tour, and now they’d returned home in triumph to play Lollapalooza.

It was easy to see they were stoked. Almost from the moment they took the stage, they were hurling themselves around like sock puppets. I’ve heard enough of “Wild Onion” to know that there are some wryly rueful and even mildly cerebral tunes in their repertoire, but for their Lolla set it was pretty much power-chord overload. Their fans—who were many—seemed to love it, and the guys fed on that energy so that their performance rapidly went from propulsive to convulsive. Seriously, there was so much thrashing and pounding and leaping around, I wouldn’t be surprised to learn the entire Sprint stage had shifted a few inches during their set.

And yet they took some chances, too. It was only twenty minutes in before they debuted a few new tunes. Live audiences can be a bit shirty about this kind of thing—they’re here, after all, to hear songs they already know and love—but the gestalt at Lolla was so blissed-out (the aroma of ganja that wafted everywhere may provide a partial explanation) that the new tunes were as warmly welcomed as the old. The crowd didn’t even seem to mind when the band—which had been scheduled to play for a full hour—abruptly ended its set after only forty minutes. Granted, they were forty exhausting minutes—these guys must be part mustang or something—but still, it wasn’t quite righteous. I did hear some speculation that dust had become a problem; it was a very hot, dry day, and clouds of dirt were visibly billowing across the park.

Dust wouldn’t remain an issue for long. Dark clouds had been gathering—and I’m not being poetic here; I mean literal dark clouds—and it wasn’t long after Twin Peaks’ set that Mother Nature came barreling in to chase these damn kids off her lawn. The festival organizers, having seen this coming, managed to evacuate the park in time, and steered the revelers to underground shelter sites. I chose instead to go home and have a nap. (Journalism, she is a harsh mistress.) 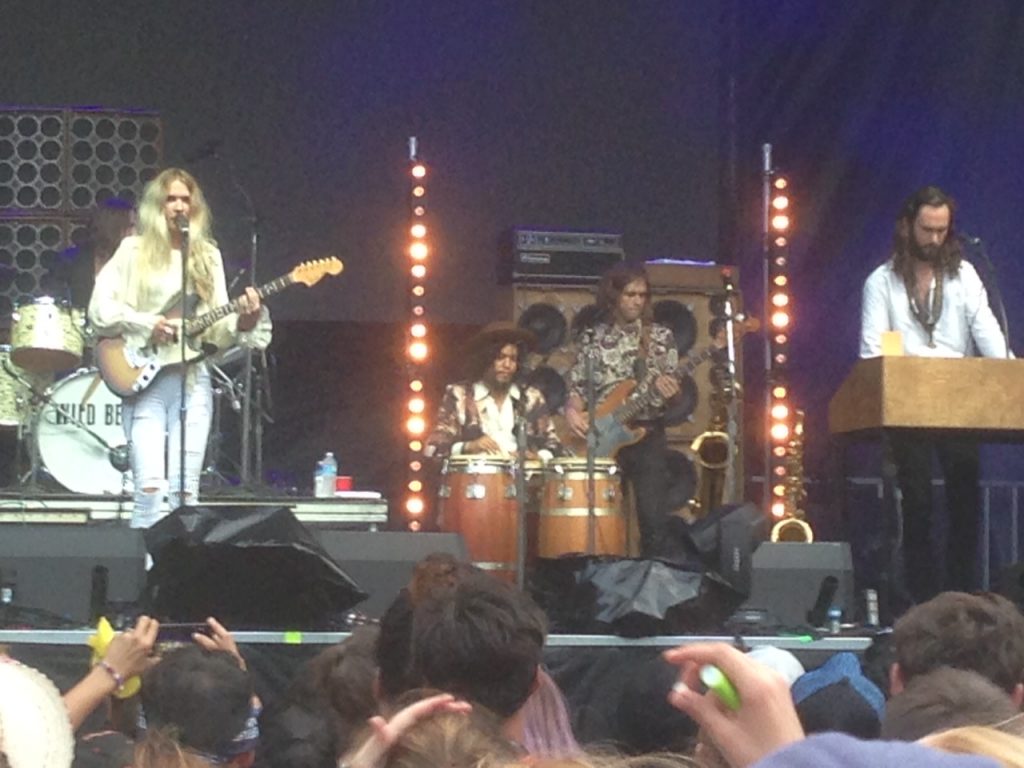 The park reopened at 3:30pm and music resumed a half-hour later, with a slightly rejiggered schedule. I was back in time to see the rescheduled set by Wild Belle, another sweet Chicago success story. Siblings Natalie (vocalist) and Elliot (instrumentalist) Bergman, who grew up in Barrington, played the east-facing Pepsi stage, which by then was bathed in cooling shadow, making the band’s reggae and Latin-inflected tunes the ideal way to chill out after a long, hot, windy day.

That said, there was nothing laid-back about the performance itself. Boasting a tight ensemble and two backup singers, the duo drove hard through some of their standards (“Happy  Home” being my personal favorite), before offering up some new material from their upcoming album. Again, the crowd was more than receptive (maybe younger audiences are more intellectually curious than my crabby, entitled generation), and the openness paid off: the new tunes are pretty great. I particularly liked “Throw Down Your Guns,” which I had expected would be a political anthem but instead turned out to be a joyous dance tune with an instrumental hook that’s pure J-pop. “Throw down your guns / In the name of love / I put my hands up,” Natalie wailed, and it didn’t take too much imagination to foresee future festival crowds wailing along.

Beguiling as the tune might be, Mother Nature wasn’t having any of it—and so far from throwing down her guns, she came blazing back shortly after Wild Belle’s final bow, causing the fest to fold early and truncating sets by headliners like Bassnectar and Florence + The Machine. But it occurs to me that in both her Sunday tantrums, Nature held off until Chicago’s hometown heroes had taken care of business. Mad respect to her for that. (Less so for the hailstones that made confetti of my window screens. But that’s another story entirely.)