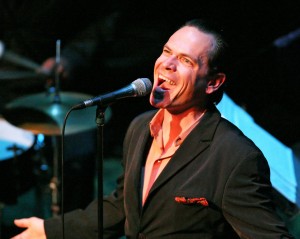 This is the first in a series of profiles of Chicagoans who have enriched both the city’s and the country’s musical life. Succeeding entries will appear on an irregular basis.

Every baritone jazz singer has to stand comparison to Frank Sinatra, whose shadow looms over them so unremittingly, you want to take pity and just equip them all with miners’ helmets. And it’s true that in terms of sheer tonal beauty, Kurt Elling—the bari-jazzman of the moment—doesn’t quite match his famous forebear. Elling’s wiry, scrappy, middleweight-boxer of a voice, marked (or marred, depending on your point of view) by the occasional flatness of Chicago vowel sounds (he was born here in 1967), is an entirely different animal from Sinatra’s opulent, resonant, cello-like instrument. Sinatra’s voice is all roundness and legato; Elling’s, at its most characteristic, is serrated and staccato.

And yet the way in which Elling doesn’t quite measure up to Sinatra pales into insignificance next to the many ways in which he surpasses him. Elling’s range is an astonishing four octaves, double that of Sinatra’s, and his boundless facility for improvising is so far beyond anything Sinatra ever exhibited, there aren’t even analogous samples to set side by side for comparison. Certain jazz singers—Mark Murphy and Betty Carter come to mind—seem almost to be more instrumentalists than vocalists; and you can be excused, on hearing Elling for the first time, for placing him in this camp. His musical intelligence is so elevated, and his delivery so confident and precise, that—to paraphrase what someone once said about Maria Callas—you can hear every sixteenth note, every quarter rest. The difference is that Elling, unlike Callas, is often writing those notes and rests on the fly.

But it’s a mistake to consign Elling to the category of vocal instrumentalists, because he’s also very much a words guy. He’s toe-to-toe with Sinatra here—and with other great singer-storytellers like Nat King Cole and Peggy Lee. More than that, he doesn’t confine his aptitude to other people’s texts; he’s superbly gifted at crafting his own. He’s the incontestable heir to Jon Hendricks, the venerable master of vocalese (the art of adding lyrics to classic jazz solos), and he declares as much on his first album, whose second cut, “Dolores Dream,” features Elling singing his own verses to a Wayne Shorter melody. “The white electric skillet of a day threatened to sear us all away,” he sings, unaccompanied and defiantly rubato, “fat frying, spluttering, rank Chicago smeltering along.” This is a great lyricist grandly throwing down his gauntlet; and to date no one has picked it up. Meanwhile Elling has continued his poetic growth apace with his musical progress—the latter in partnership with his longtime pianist, Laurence Hobgood, who’s a wizard in his own right.

What I love best about Elling is that he is so incontestably a native son of this city and no other. The accolades he’s won are really laurels for all of Chicago (and they are many; every one of his albums has been nominated for a Grammy, and he was named DownBeat’s “Male Singer of the Year” so many years in a row that when someone else got the nod last year, you almost wondered whether Elling had up and died). Elling’s drive, bravado, humor and fearlessness are all hallmarks of the prototypical Windy City character, even if he does, for now, collect his mail in Manhattan.

His virtuosity, on the other hand, is all his own. But being Chicagoans, what the hell, we’ll put in a claim for it anyway.

“Close Your Eyes” (1995, Blue Note)
Elling’s debut album is the definition of what people mean when they say someone “burst onto the scene.” It finds him crooning, scatting, mimicking various instruments (and slam-dunking each one), and even laying down a bit of spoken-word hilarity.

“This Time It’s Love” (1998, Blue Note)
From the opening cut—“My Foolish Heart” reimagined as a jazz suite—Elling spells out his modus operandi: no standard gets a standard treatment. The result is that what appears to be his most conventional album is actually brashly innovative.

“Live In Chicago” (2000, Blue Note)
Recorded at the Green Mill, Elling’s home base when he’s in town, this is probably his best album. He’s a stage animal above all else, and when he plays a full house the energy level shoots through the roof—not only his, but the entire ensemble’s.

“Dedicated To You” (2009, Blue Note)
Elling’s tribute to the legendary John Coltrane-Johnny Hartman collaboration is a gutsy move—his gruff, flinty instrument is entirely different from Hartman’s polished, velvet one—but bravura musicianship knocks it out of the park.

“The Gate” (2011, Concord)
Producer Don Was helps Elling expand the jazz repertoire with stellar swing versions of The Beatles’ “Norwegian Wood,” Stevie Wonder’s “Golden Lady,” Joe Jackson’s “Steppin’ Out,” and Earth, Wind & Fire’s “After the Love Has Gone,” among others.

Kurt Elling performs songs from his new album, “Passion World,” at the Jay Pritzker Pavilion on August 12, with Carlos Kalmar and the Grant Park Orchestra.