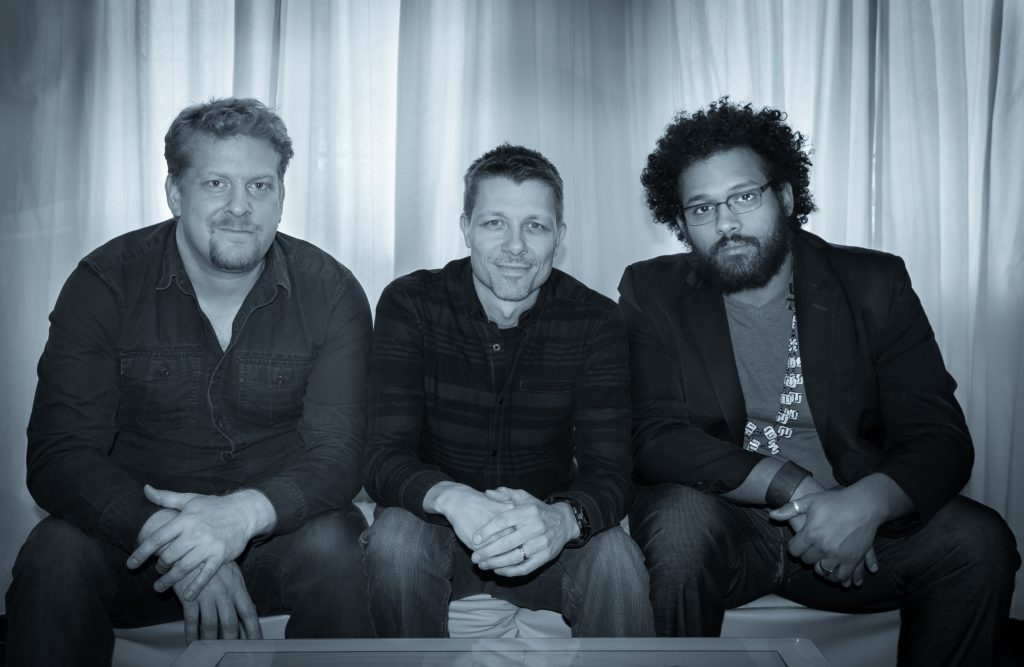 Envision the Aqua Tower, 225 North Columbus Drive, on its side in black and white. This image could be in motion but is actually frozen in time with a watery, wave-like feel, as created through photographer Scott Hesse’s lens. This image—complete with color and complementary crop by a graphic designer–is the cover art for Hesse’s trio’s new album, “The Stillness of Motion,” whose CD release party is on August 14 at Constellation.

Hesse, a Chicago-based jazz guitarist who has performed with Greg Ward, Dee Alexander and Ernest Dawkins, among many others, believes that recording music is similar to documenting life through photography. “This music is very fluid and always changing, but when you capture it on a recording, it freezes moments in time, like what happens in a picture,” says Hesse, who is joined on the album by bassist Clark Sommers and drummer Makaya McCraven. “You can definitely hear the movement and evolutions taking place… but it’s never going to be that way again.”

This ten-song session contains nine Hesse originals. The compositions and performances are inspired by heroes such as Maurice Ravel, Paul Motian and Jimi Hendrix. On “Ravel,” Hesse notes how he wrote an original melody around the chords from “Pavane for a Dead Princess,” first composed by the tune’s namesake in 1899. “If you know Ravel’s composition, you’ll hear it. But it’s not just the melody,” says Hesse, who originally composed “Ravel” for a string quartet. “I wanted that song to reflect the improvisation as it happens, and I wanted the improvisation to reflect the composition.”

For Sommers, who also plays in Kurt Elling’s quartet and Dana Hall’s “Black Fire,” the thorough thoughts shaping Hesse’s compositions allow the trio to breathe individually and together. “Every tune has its own personality and lots of compositional integrity. We spent lots of time—approximately one year—chiseling away at this material. The challenge was getting a handle on it and collectively establishing what it became.”

On “Laws of Motian,” the trio conjures the spirit symbolized (or more accurately cymbalized) by Paul Motian, the drummer whose uncommon time signatures became his common core. To achieve what Hesse describes as Motian’s “elastic time,” the trio maintained eye contact while performing, something not always possible in a recording studio.

“Makaya’s playing with brushes throughout, which, for me, was a nod to the Bill Evans Trio,” Hesse says. “We all knew after one take that we didn’t need to do it again. We had caught the spirit of the song.”

“When Scott brought that tune in,” McCraven recalls, “he wanted to keep it so open. I was just trying to stay responsive to Clark so we could all flow and communicate.”

Hesse’s composition “Hendrix” is played by his twelve-year-old daughter Sage nonstop in his car, and has also become her favorite bedtime tune. Inspired by Hendrix’s “Spanish Castle Magic”—which used to be another favorite bedtime jam for Sage—Hesse rearranged the original’s harmonies and grooves for the trio. “If someone heard my version and said, ‘You don’t know Hendrix at all; I don’t hear any Hendrix influence,’ I’d say, ‘It’s there. I just took liberties.’”

Hesse, Sommers and McCraven first played together in 2013 at Andy’s, where they were supporting vocalist Typhanie Monique. “Our chemistry was very apparent,” says McCraven, who has also played for guitarist Bobby Broom and trumpeter Maurice Brown. “We’re like-minded and sensitive to each other’s playing, and that works nicely.”

Hesse’s trio debuted material from “The Stillness of Motion” once in public, at Jerry’s on Division, before their one-day recording session. This live performance, Sommers says, helped the vision-in-progress develop further. “That gig galvanized us; we had finally found our respective places in the music,” he says. “By the time we got into the studio, it felt natural. I felt liberated. This was not the easiest music to navigate, but now it feels pretty natural to play.”

For Hesse, the trio’s mutual moments—where the individual interpretations intersect with their collective heart—are what make this endeavor worth the work.

“We’re choosing our paths together at the same time,” says Hesse, who made his professional debut in 1986 at age fifteen, with his grandfather and father, in Iowa. “We don’t know what we’re going to do; we just know where we’re going to end up…  somehow.”